BREAKING:Oba Of Lagos Palace Set On Fire, His Staff Of… 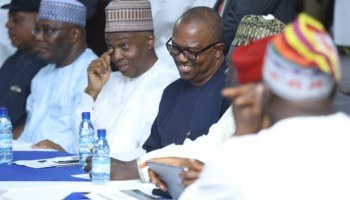 SAHARANEWS – Following the suspension of Chief Justice of Nigeria, Samuel Walter Onnoghen which has generated a lot of mixed reactions both within and outside Nigeria, SaharaReporters has obtained more details of what actually led to the troubles of the ex head of the Nigeria’s 3rd arm of the government.

According to an impeccable source, the entire drama started following a high powered meeting by the People’s Democratic Party (PDP) in Dubai where the party mapped out strategies ahead of this year’s general elections, tagged ‘The Dubai Strategy’ to wrestle power from the All Progressives Congress (APC).

During the Dubai Strategy in 2018
the presidential candidate of the Peoples Democratic Party, PDP, Alhaji Atiku Abubakar met last year, 2018 in Dubai immediately after the party’s presidential primaries in Port Harcourt.

ALSO READ:  JUST IN: After killing the Biafran youths, Buhari does not deserve a single vote from the South East - Agbakoba

According to our source, the multi layered strategy which covers both pre-election and post-election “strategies” also involved buying judges including the Chief Justice.

“The Senate President Bukola Saraki was responsible for making the payments to Onnoghen and his colleagues.”

“Unknowingly to the PDP, the plan was then leaked to the presidency by a ‘traitor’ at the Dubai meeting and the leak prompted the move to get rid of Onnoghen at all cost.

Last week, President Muhammadu Buhari suspended Onnoghen in a controversial move that many believe was related to the fourth coming presidential election.

Given the mood of the nation going into the polls, many are expecting next month’s vote to end up in the courts.

ALSO READ:  JUST IN: We will resist Buhari’s attempt to intimidate Onnoghen with every machinary at our disposal - EK Clark

Meanwhile, SaharaNews reported that BVN has exposed more accounts owned by Onnoghen which were not revealed in his assets declaration.