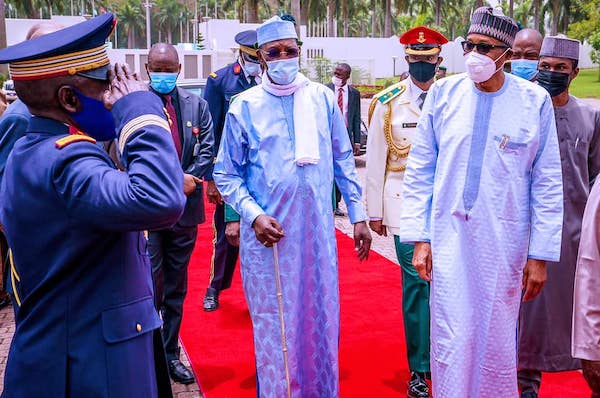 The President of Chad, Marshal Idris Deby Itno, has expressed optimism that the armies of the four countries under the Multinational Joint Task Force can eradicate the Boko Haram insurgents.

According to Daily Trust, the Chadian President spoke Saturday while responding to questions from State House correspondents after an official visit to President Muhammadu at the Presidential Villa, Abuja.

The Chadian leader said terrorism remains an issue in the Lake Chad Basin and the Sahel region of Africa because the MNJTF has not been carrying out enough required operations.

According to him, he discussed the situation at the MNJTF with President Buhari, saying a situation where the joint military outfit embarks on just one operation in a whole year has made the fight difficult.

Marshal Into expressed optimism that with the new strategies being deployed and new officers with fresh ideas being assigned to take over commands at both national and regional levels, the menace of the various terror groups, including Boko Haram and the Islamic State, West African Province (ISWAP), would be addressed permanently.

“However, with the new security apparatus that has been put in place with the new security chiefs and not only in Nigeria but even on the Multinational Joint Task Force itself, which also has new leadership, that we’re hopeful now that with new strategies and new dynamism, that we’ll be able to address definitively the issue of Boko Haram.

“Unfortunately, the resilience of Boko Haram and the Islamic State in the Lake Chad Basin has been unprecedented. They are being supplied and being trained and being formed through Libya. The MNJTF has done a lot of work and as you have seen recently, we’ve had exchanges on this with my brother on the way ahead. With the new team of the Chief of Defence Staff and the new Commander that has been appointed at the Multinational Joint Task Force, they are convinced that we can eradicate Boko Haram.

“There’s a lot of hope on this new team, with this new strategy. I remain confident that the four armies of the four countries can finish this evil and eradicate Boko Haram once and for all,” he said.

President Itno, while speaking further, said a number of important issues including the challenges facing Nigeria and Chad, were discussed at the meeting.

He said the meeting also discussed various bilateral relations between the two countries.

The Chadian President, who also said that they discussed the issue of Islamic state and the challenges that they pose to the two countries as well as the lake Chad environment, added that the issue of transfer of water from the Central African Republic was looked into with the question of Chad being a landlocked country.

They also discussed the issue of power and the interconnection, connectivity of power between Nigeria and Chad and the closure of the borders as well, adding that the discussion made him understand the reasons why the borders were closed.

Ganduje Harasses Activist’s Family With Policemen In Kaduna, Katsina For Questioning How COVID-19 Funds Are Spent