King Charles III snubbing a black man, while he shakes the…

CHURCH: I have no regrets, I did I did because God needs money – fr Mbaka fired back at critics. 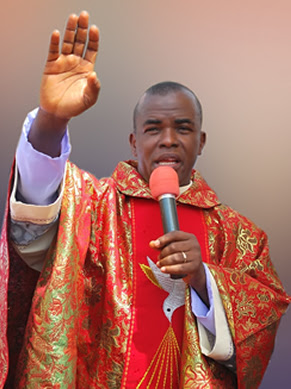 Ejike Mbaka, spiritual director of Adoration Ministry, Enugu, says God deserves money. He said this in reaction to criticisms that trailed his attack on some influential politicians who allegedly refused to donate to his church.

The priest had said Atiku Abubakar, presidential candidate of the Peoples Democratic Party (PDP), and Peter Obi, his running mate, will end in shame” with the way they are going. He also attacked President Muhammadu Buhari who was represented at the church’s thanksgiving by Abdullahi Ganduje, governor of Kano state. In a new video posted on YouTube, Mbaka said anyone who did not want to donate money to the church should “hold it”. “There are some people who are ingrates. These are people from the kingdom of succubus and incubus,” he said while speaking in Igbo and English.

“I want to tell you that all these things are caused by jealousy and envy. They are not fighting Mbaka for anything wrong. Everyone who came was blessed but they turned it against me, saying I am after money. “God deserves money. If you don’t want to bring your own in your stinginess, hold it. I will give God all that I have and even if anybody wants to join them, you’re free to join them. “Where God the Father, Son, and Holy Ghost are, there Fr. Mbaka will be.

I will build this place for the church. Whoever felt insulted, I apologise. It was you who came for the bazaar.” The priest said no one could fault him because he had concluded the mass before seeking donations. “We do it outside, publicly because if I am silent, rumours will begin to spread that someone gave me $10 million and why did Mbaka keep quiet? They will abuse me even if I am silent because anytime they want to attack this ministry, they will start somewhere,” he said.

“If I am silent, they will attack; if I talk, they will attack it. And don’t forget that the liturgy was not tampered with. I finished the mass and even removed my priestly attire. No one can fault me.”

IPOB: Facts emerging, when ipob declared election boycott so many do not understand why – see this…

BRAKING: The Israeli Ambassador to the UN blame Nigeria vote at the UN on Israel Biafra ties, says Israel is committed to Biafra freedom.