Idara Gold Biafra will be arranged at Justice Binta…

CHURCH & POLITICS: Fresh from the Vatican city were he received popal blessings, Obi appeared to be more Christian than the embattled Fr Mbaka as he urges all to pray for the priest. 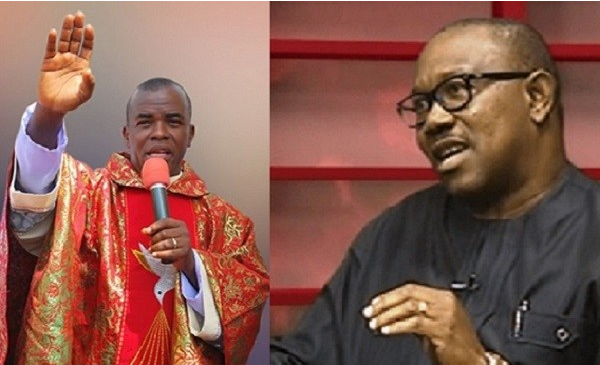 The Controversial Catholic priest and Spiritual Director of Adoration Catholic Prayer Ministry, Fr Ejike Mbaka again in the news again over his prophecies on 2019 elections and his attack on the vice presidential candidate of Peoples Democratic Party,PDP, Mr Peter Obi for refusing to donate money to his ministry.

Obi had just returned from the Vatican where he received Papal blessing to proceed with his vice presidential ambition but got back home to be ‘defecated’ upon by Fr Mbaka. In a video that has gone viral, Mbaka was seen telling the vice presidential candidate of PDP, Peter Obi during the annual harvest and bazaar celebration of the church that neither the PDP presidential candidate, Atiku Abubakar nor President Muhammadu Buhari of the All Progressives Congress, APC, would win the 2019 presidential election. A man of controversy Fr Mbaka is not new to controversies.

His predictions and prophecies are often greeted with mixed reactions from Nigerians both at home and in the diaspora. Mbaka has the tendency to speak from both sides of the mouth. He says one thing and contradicts himself the next time. He had knocked Buhari severally and turned around again to praise him. He had also given conflicting prophesies on Buhari and Atiku.He once prophesied that Atiku will defeat President Buhari in the 2019 presidential election but he warned the PDP presidential candidate not to behave like Buhari when he gets to office. In December 2017, Fr. Mbaka had prayed for Atiku saying that he has what it takes to make Nigerians smile. Mbaka, who in his new year eve message of 2015, predicted Buhari’s electoral victory over the then President Goodluck Jonathan had also later accused him (Buhari) of playing ethnic, despotic politics by surrounding himself with people without vision and not inclined to his line of thought. He said the President has wasted a golden opportunity offered him by God and by implication, has disobeyed God.

“Someday, they said the government has spent trillions of naira on social investment scheme and I want to know who are the people they were spending the money on; the vice president said they are giving N10,000 to small scale businesses and I asked, is this how they will transform Nigeria? You give somebody N10,000 for business, what type of business will N10,000 start?” When Atiku Abubakar emerged the PDP presidential standard-bearer, Mbaka knocked him and raised fears that Atiku may not be able to solve the problems of Nigeria, as according to him, the problems of the nation were so enormous and challenging.

“If anybody is thinking that if Atiku becomes the President of Nigeria, things will get better, ‘who born you? It is easier for a Camel to pass through the eye of a needle than this country to be good. “Somebody will have billions and want to take the one belonging to the public while hunger will be killing his people. Look at the type of money they shared during the primaries to the extent that they brought Bureau de Change. They said Buhari is change, but Atiku is bureau de change. They were sharing the money in dollars and it was going out in millions of dollars in Nigeria where hunger is killing people, where you don’t have food to eat.

When the ruling All Progressives Congress announced the cost of its Expression of Interest and Nomination Forms, Mbaka described the cost as outrageous; saying that if the leadership of the party had conscience, they would not have collected N24 million from people to obtain the forms, adding that a party with conscience would have returned the money to the aspirants instead of casting aspersions on them. “There are some people that sold their land to pay for this form because of the promise they were made. I don’t think these politicians were thinking of heaven, that is why they are ready to kill anybody that stands on their way,” he said.

Atiku’s response Irked by Mbaka’s lack of confidence in Atiku, spokesperson of the Atiku Campaign Organisation, Segun Sowunmi had said the 2019 general elections will be based on issues and as such, will not join issues with Rev. Fr Mbaka. “We have taken the position that we will respect the clergy. We will respect all Nigerians, the leaders of the political class and we will even respect President Muhammadu Buhari

JUST IN: The influences of the Northern cabals will die with APC, I can assure you, there will be no cabal in my government as it will all inclusive – Atiku.

IPOB: Facts emerging, when ipob declared election boycott so many do not understand why – see this…