2023 ELECTION:Candidates who failed to understand…

Tinubu Is now believe in one Nigeria.Igbos open your eyes 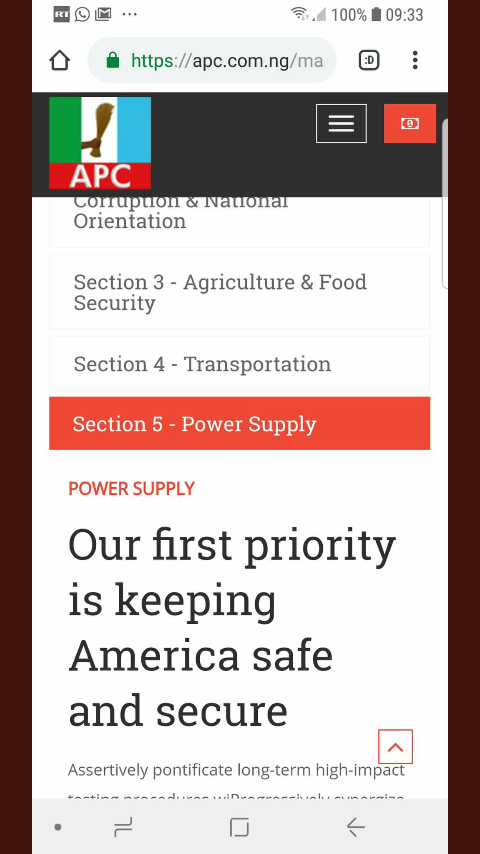 The ruling All Progressives Congress (APC) has been caught padding its manifesto for the 2019 elections with materials copied from foreign websites without attribution.

The brazen plagiarism, which appeared from the title of the party’s ‘plan’ for energy infrastructure, comes amidst complaints of a worsening disregard for intellectual property rights in the country.

President Muhammadu Buhari apologised in 2016 after being caught using lines of a speech once delivered by former American President Barack Obama without attribution.

Only last week, Segun Sowunmi, a spokesperson of the opposition Peoples Democratic Party presidential campaign organisation, also apologised for stealing a speech from President Donald Trump and claiming it as his original thought in a New Year message on Facebook.

In the manifesto it recently uploaded on its website, the APC said its priority was to “ensure a safe and secure America“, setting itself up for scrutiny of the rest of the document which was designed to convince Nigerians that the party deserved reelection at the poll next month.

A google search of the first paragraph under the power’s proposal for power infrastructure revealed that the words were lifted in verbatim from either of a slew of website where they previously appeared, and without any attribution.

The possible places where the party might have lifted the lines included one American political action page and and an Ivoirien energy website.

It was not immediately clear which one the party plagiarised amongst the websites, who appeared to have similarly plagiarised one another.

The development exposed the little input which politicians often showed towards their literary works before being published.

It does not appear like Mr Buhari or Vice President Yemi Osinbajo made much inputs in the document. Instead, there is a high possibility that they were given to consultants to draft with little supervision or contribution.

When Mr Buhari was caught plagiarising Mr Obama in 2016, the Presidency placed the blame on a deputy director whom it said had been disciplined, but did not provide any evidence as to the identity of the official or the extent of punishment.

ALSO READ:  BURSTED: The IPOB's Call Off Of Election Boycott Forced Buhari And INEC Into The Last Minute Postponement of 2019 Elections As IPOB Sets To Resist The Already Perfected Plans To Rig The Elections

A spokesperson for the APC said the party was not responsible for the document, and also assumed ignorance of when it was uploaded online. The document, which discussed the party’s ‘NextLevel’ campaign in detail, appeared to have been uploaded only in the last few days.

“We do not know how the documents got on our website,” party’s spokesperson Lanre Issa-Onilu told our correspondent through telephone on Saturday afternoon. “We have contacted our webmaster who also suspected that some mischievous elements hacked into our website and uploaded the embarrassing files.”

Mr Issa-Onilu said the party had since regained control of the website and removed the offending materials. Opposition supporters on social media, however, rejected the claim that the website was hacked as an afterthought. They said the party had shown a shocking lack of respect to Nigerians by copying materials from the Internet despite the massive resources it has access to.

Mr Issa-Onilu said the apc.com.ng that published the offending materials still belonged to the party, and would be used to run its 2019 election activities online. The party had previously disowned the website in April 2018, announcing OfficialAPCNg.com and new Twitter and Facebook accounts as its official channels online. Bolaji Abdullahi, the party’s spokesperson at the time who issued the disclaimer, had since resigned and joined the PDP.

But the new website does not appear to have been put into use by the party, which compelled its leadership to stick with the old and disputed apc.com.ng address. Mr Issa-Onilu’s admission that the party still uses the old page which published the plagiarised documents appeared to have made criticism that greeted the action a fair game.

The campaign logo for ‘NextLevel’ itself has been a subject of intense scrutiny, with many strongly believing it was plagiarised from Winthrop University’s Rex Institute.

JUST IN: APC Pulled down official website after being cought with plagiarized manifesto