Your demand for Nnamdi Kanu’s release is heavy but… 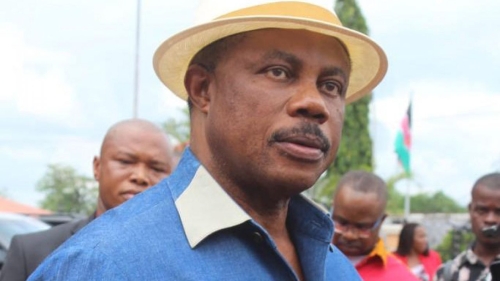 SAHARANEWS – Anambra State government has confirmed that Governor Willie Obiano has gone into in self-quarantine.

The secretary to the state government, SSG, Prof Solo Chukwulobelu and the Chief of Staff to the governor, Mr Primus Odili gave the confirmation in a joint press briefing on Monday.

The officials said the governor has been in self-quarantine since 11 days, and has not shown any signs of the disease.

“The governor was at the NEC meeting on Thursday, and you know how the sitting arrangement is, after the Anambra State governor, you get the Bauchi State governor, who has announced his status recently.

“But if you are aware of the sitting arrangement during the meeting, you will find out that they usually observe social distancing. That you are in a hall with a man who has the disease does not mean that you can be infected.

“The governor is a very enlightened person, and because he knows he has been in a meeting with such calibre of people, he decided to go into self-quarantine.

“Obiano is on self-quarantine. I have not seen him for the past one week and we only talk on the phone. We had two hours meeting yesterday (Sunday) using zoom. There is no fears about his health at all,” the officials said.

ALSO READ:  BREAKING: Buhari's Minister Asks Nigerians Not To Expect Much From Him, Admits He Didn't Know Much About The Ministry

They also appealed to individuals and corporate organisations to donate to the state government to keep fighting the entry of the virus to the state.

They said about N1billion has already been spent to procure personal preventive equipment (PPE), and that it is not yet enough for a population of seven million in the state.