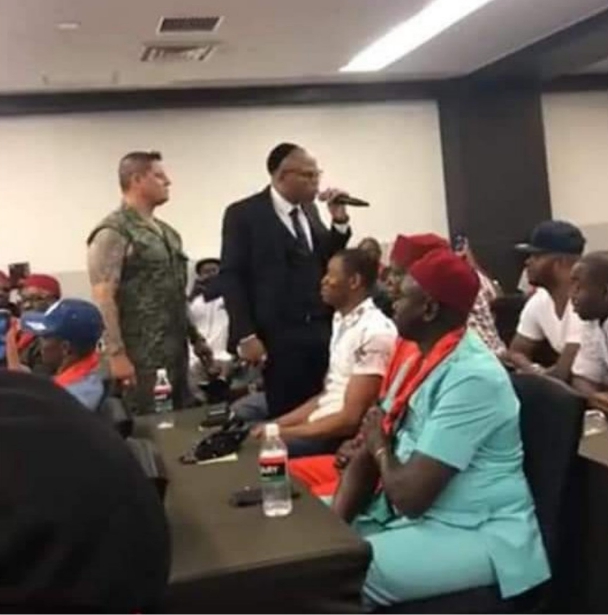 SAHARANEWS – Nnamdi Kanu, the leader of the Indigenous People of Biafra, IPOB, held a town hall meeting yesterday in Japan.

The IPOB leader has held several town hall meetings since he left Nigeria, but the meeting in Japan seems to be exceptional.

Reactions trailed the meeting over the presence of international security personnel.

In the a live video broadcast on social media, security men who some suggest are Russia nationals and others say are Chinese, were seen securing the IPOB.

This has generated questions such as:
1. Did the United Nations grant you security for protection as many had suggested?
2. Did IPOB members employ the security personnel?
3. Or is there a secret ally that solved it for the IPOB leader?

Lekan Peter, wrote on Facebook: “Finally Nnamdi Kanu has attracted the attention of the international community without firing a single bullet.”

“Our Government made mockery of our democracy by declaring him and his group, terrorists, now the world is making mockery of Nigeria by giving him security to go anywhere he wants to go.” — Ezinne Jude

ALSO READ:  Keeping Our Dead Over 3 Days Before Burial Must Stop, Causing Havoc in Biafraland - IPOB

“Like say na play, this guy don restore Biafra o!. Imagine the crowd he pulls in and outside the country, even to the extent of traveling round the world uninterruptedly with foreign security” — Adebayo Fadele

“If you still think Nnamdi Kanu is joking with his agitation for Biafra, you need a hot slap to wake up.” — Okoro Igwe…