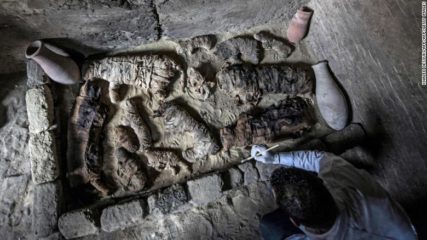 A mass cat cemetery and a collection of rare mummified scarab beetles were discovered during an archeological excavation in Saqqara, Egypt, the nation’s antiquities ministry said Saturday.

Seven tombs were discovered during the archaeological mission, which started in April. They included three tombs with dozens of cat mummies that can be traced back to the fifth and sixth dynasties thousands of years ago.

Four other tombs were found, including one belonging to Khufu-Imhat, the overseer of buildings in the royal palace.

A collection of scarab beetles was also unearthed in a section called the Memphis necropolis. Two of the insects were wrapped in linen inside a rectangular limestone sarcophagus decorated with paintings of large black beetles considered sacred in ancient Egypt.

An additional collection of scarab mummies was found in a smaller sarcophagus, according to Dr. Mostafa Waziri, secretary general of the Supreme Council of Antiquities.

Government officials and ambassadors from all over the world toured the newly-discovered tombs south of Cairo on Saturday. They also saw wooden gilded statues with the features of a lion, a cow and a falcon, as well as 1,000 amulets, some jars, writing tools, and chapters from the Book of the Dead.

The names of two ancient Egyptian women called Subek Sekt and Mafy were also found engraved on a door, but archeologists are working to find out who they were.