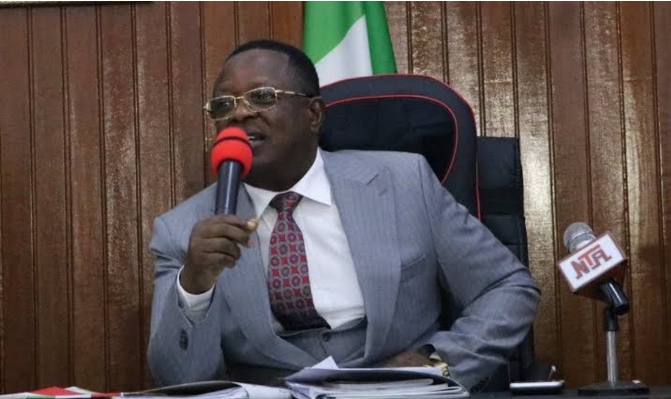 SAHARANEWS – Ebonyi State government has banned members of the Indigenous People of Biafra, (IPOB) from organizing their activities in any part of the state, insisting that the group remains proscribed.

This is even as the state government warned the people of the state to desist from taking part in the activities of the organization, warning that it would not hesitate to bring offenders to justice.

Government’s warning was contained in a press statement issued by the Secretary to the State Government (SSG), Dr. Kenneth Ugbala, and the Commissioner for Information and State Orientation, Chief Kenneth Uhuo.

It advised parents and guardians not to allow their children and wards to engage in any unauthorized gatherings as according to it, security agencies have been detailed to deal with any individual or group found to be involved in any unlawful gathering in the state.

This is coming barely two weeks after IPOB members held a protest against the proposed Ruga settlement which was suspended and other alleged bad policies of the Federal government.

Ebonyi government said that constructive engagement with the Federal government remains a better option through which the grievances of the Igbo in the country would be addressed, saying that any individual or group that has any genuine reason to agitate should do so through the platforms of the South-East Governors’ Forum, Ohanaeze Ndigbo, and other legitimate means within the country.

The statement partly read: “The attention of the public is hereby drawn to a Federal High Court order, which proscribed the Indigenous People of Biafra (IPOB) since September 2017 and classified it as a terrorist organisation in Nigeria.

“By that order, the IPOB has become an unlawful organization, and all its activities become criminal within the provisions of the Terrorism (Prevention) Act of 2011.

“Members of the public are therefore warned that any participation in the activities of the organization, under whatever guise has become an offence punishable under various laws of the country.

“As a responsible government committed to maintaining law and order, the state government is not going to allow IPOB to endanger the lives and property of their citizens, by organizing any form of activity in the state.

“Any individual or group that has any genuine reason to agitate should do so through the platforms of the South-East Governors’ Forum, the Ohanaeze Ndigbo, and through other legitimate means within the Nigerian federation.

“The Ebonyi State government reiterates its belief that constructive engagement with the Federal government shall gradually address all grievances of the Igbo in Nigeria.

“Traditional rulers and town union leaders should be vigilant, and not hesitate to report to security agencies every suspicious movement in their domains,” the statement added