We are ready to consider dialogue with Nnamdi Kanu, Igboho —…

Army Shot Our Member In Ekwulobia, Label Him Top ESN… 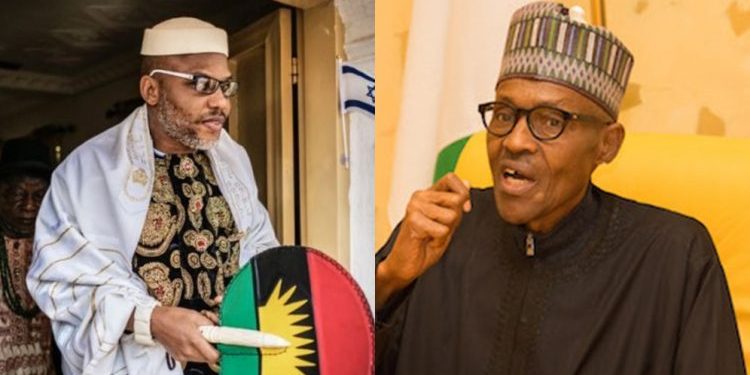 Mazi Okechukwu Isiguzoro, Secretary-General of Ohanaeze Ndigbo, has asked President Muhammadu Buhari to allow Nnamdi Kanu, leader of the Indigenous people of Biafra, IPOB, to address the people of the South-East as unidentified gunmen continue to wreak havoc there.

According to the Daily Post, Simon Ekpa, who is based in Finland, is being accused of sponsoring the unknown gunmen who are disrupting the Southeast.

The separatist group fired Ekpa, who claimed to be a disciple of Kanu, for alleged subordination.

Ekpa has continued his Biafra agitation and sit-at-home orders in the Southeast despite his suspension.

The highest Igbo political and social organization, Ohanaeze Ndigbo, placed a $50,000 bounty on Ekpa after being disappointed by the order.

Following Kanu’s arrest and detention, the killings in the Southeast increased, according to Daily Post.

Following his arrest in Kenya and repatriation to Nigeria in June 2022, the IPOB leader has been held by the Federal Government.

An unidentified group of gunmen beheading Chris Ohizu, Chairman of Ideato North Local Government in Imo State, was captured on video and circulated online over the weekend.

One of the many murders that have occurred in the Southeast is Ohizu’s head being decapitated.

Ekpa has been accused of supporting these gunmen, despite the fact that they have denied any connection to IPOB.

However, Ohanaeze Secretary-General Isiguzoro stated that if Buhari permits the IPOB leader to address Nigerians, the killings in the Southeast would decrease.

Isiguzoro reiterated his position regarding a plan to use Ekpa to destabilize the Southeast elections in 2023 in an interview with the Daily Post.

Isiguzoro claims that: The incessant incarceration of Nnamdi Kanu, which Simon Ekpa is exploiting excessively, is to blame for the madness of sit-at-home, incessant killings, and insecurity we are seeing in the Southeast.

“Ekpa is an opportunist who seeks fame and fortune and saw Kanu’s detention as an opportunity to embark on his journey of acquiring wealth from politicians and destroying the Southeast’s populace.

“The only remedy for Simon Ekpa’s madness is a passionate plea to the President of the Federal Republic of Nigeria to permit the leader of IPOB to address Ndigbo possibly in February prior to the elections. There is a large-scale conspiracy by some external enemies of Ndigbo, and they are using Ekpa to defraud and ensure that there is an election boycott in the Southeast.

“Kanu has continued to say through his lawyers that these killings and insecurity in the Southeast should end. The only cure to this Ekpa’s madness is for Buhari to allow Kanu, even if it is a five-minute broadcast. There should be an end to the activities of unknown gunmen that Ekpa encouraged, and the reason those messages have not had an effect is that people are unsure whether they are from Nnamdi Kanu.

Therefore, the Federal Government ought to provide Nnamdi Kanu with a five-minute broadcast in which he can address the people of the Southeast in order to ensure a peaceful election; this would put an end to Ekpa’s madness.