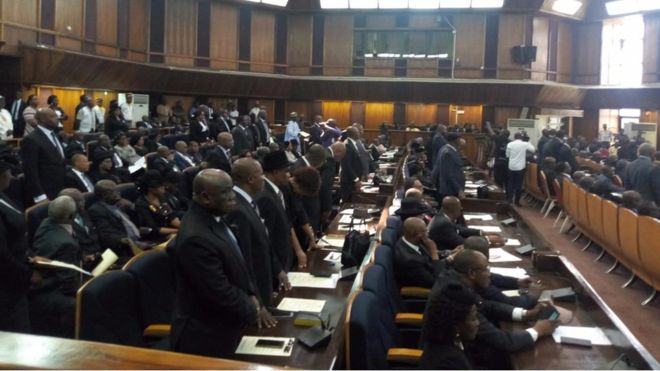 SAHARANEWS – The 250 members of the election petition tribunal for the forthcoming elections inaugurated by the Acting Chief Justice Of Nigeria Justice Tanko Mohammed on Saturday were selected by Justice Walter Onnoghen before he was suspended on Friday, SaharaNews gathered.

Onnoghen who was suspended under controversial circumstances is currently facing trial on alleged false asset declaration at the Code of Conduct Tribunal(CCT). He had announced his plans to inaugurate the tribunal a day before he was suspended.

The members of the tribunal “are the same, no difference,” the Chief Registrar of the Supreme Court, Hadizatu Mustapha, said on Sunday morning, when asked if the names of the inaugurated members were different from the ones constituted by the suspended CJN,

The opposition has accused Mr Buhari of paving way for the rigging of the forthcoming elections, with the suspension of Mr Onnoghen.

Both Mr Onnoghen’s suspension and the inauguration of the tribunal by the acting CJN, Mr Muhammed, have been rejected by the opposition and several Nigerians who are concerned about the independence of the judiciary and the fate of constitutional democracy in the country.

International observers have also expressed concerns over the development and urged that the issue be resolved according to the rule of law.