Engaging With Nnamdi Kanu’s Siblings On Matters Concerning Biafra, Is As Useless As Bread Submerged In Dirty Water 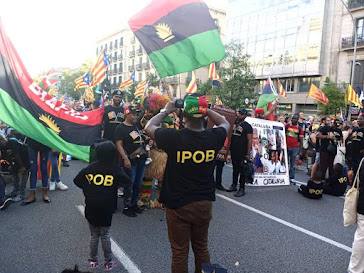 Every genuine movement for freedom must, without a doubt, have a supreme leader and leadership. In the case of the Indigenous People of Biafra (IPOB) campaign for Biafra Freedom, Mazi Nnamdi Kanu, a member of the Israel Kanu family from Afaraukwu Ibeku in Abia State in Biafraland, is the indomitable leader of IPOB.

Even though Nnamdi Kanu is from Israel Kanu’s family, the fact that he is detained unjustly by the Nigerian federal government does not make any of his siblings or other family members his successor or representative. This is primarily due to the IPOB Movement’s hierarchical structure, in which no member of Kanu’s family holds a position or is fixed in any way.

Additionally, Nnamdi Kanu himself repeatedly stated unambiguously that the IPOB Directorate of State (DOS), which is the highest decision-making body within IPOB, would automatically and immediately assume control of IPOB affairs in the event of his absence—which is currently the case.

Given the hardships that the Biafran people have endured in their struggle for freedom and that will undoubtedly continue until Biafra is finally liberated, no sincere and truly dedicated individual is currently content in this struggle for Biafra Restoration. However, the realization that the freedom struggle is a process that involves a variety of sufferings, trials, and persecutions rather than enjoyment dawned on all true IPOB members. Because of this, I am confident that IPOB will not take lightly anyone who attempts to sabotage the arduous efforts being made to restore Biafra.

The fact that Biafrans have never been politically included since Nigeria’s founding drives IPOB’s efforts to restore Biafra. We have only been victimized by a small group of political stooges from Biafra. Every aspect of Biafraland, both domestically and internationally, has been marginalized.

Because of the aforementioned facts, Nnamdi Kanu established a formidable leadership to effectively steer IPOB’s operations toward Biafra’s eventual independence.

Therefore, it is important to note that any brother, family member, or friend of Nnamdi Kanu can only speak about him with people inside or outside Biafraland on behalf of their family and not on behalf of IPOB or Biafrans. In addition, it is noteworthy that nobody outside of the IPOB leadership (DOS) represents or speaks on behalf of Mazi Nnamdi Kanu regarding Biafran issues. The Indigenous People of Biafra (IPOB), through her sole leadership, the Directorate of State, ably led by Mazi Chika Edoziem, is the only permitted representative for Nnamdi Kanu.

I am hereby assisting my voice in alerting all individuals, politicians, organizations, and national and international bodies that any engagement on behalf of Nnamdi Kanu, IPOB, or the entire Biafran people with anyone outside of the IPOB leadership is or will be as useless as bread submerged in very dirty water. Because they won’t get the results they want from such engagements, they will only be wasting their time and money.

The leadership of IPOB and the DOS represent Nnamdi Kanu and the Biafran people as a whole. Without the DOS’s support and representation, any meeting on behalf of Nnamdi Kanu or Biafra is nothing more than a gathering of vultures. It will not be for the benefit of Biafra or Nnamdi Kanu at any point.

Nigeria Government And The Games Of Blackmail Against Lawful IPOB

I would have led Peter Obi’s campaign if… – Ortom