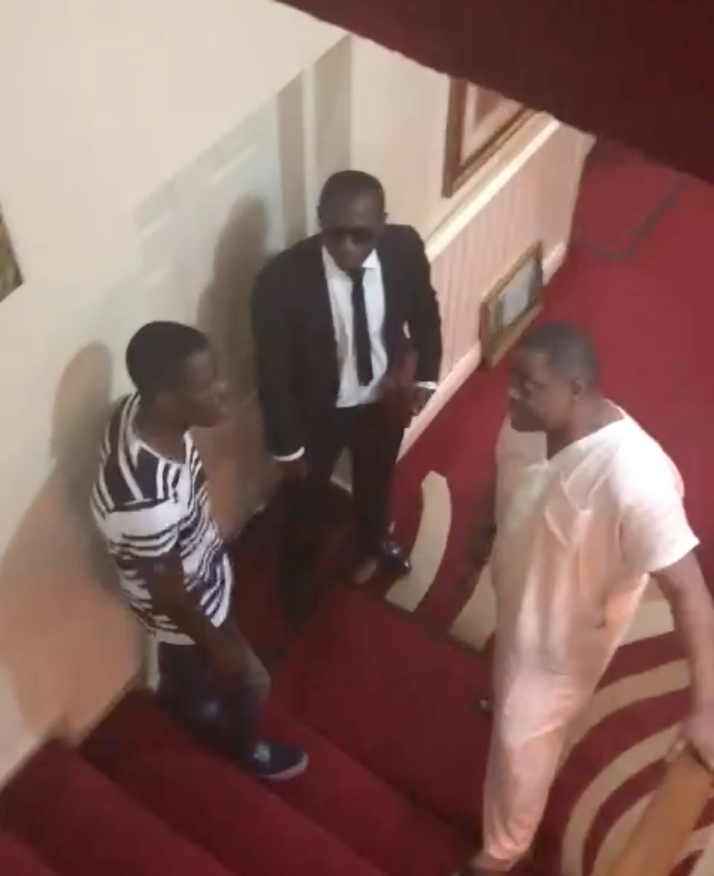 A former Minister of Aviation, Chief Femi Fani-Kayode, has been caught on camera threatening his domestic worker with a hammer.

In an exclusive video obtained by SaharaReporters, Fani-Kayode who was holding a hammer was heard asking the worker ‘Why? Why? Why?’

In response, the worker said, “I didn’t allow anybody in sir, they only called to tell me that NEPA people were around.”

Sensing he was being recorded, the former Minister walked away and started smiling.

They described the former Minister as an erratic and cantankerous man who had the habit of using his bodyguards to assault them and give them corporeal punishment.

A former driver, Jonathan Gaiya, who worked with Fani-Kayode for six months, told the PUNCH the first day he began working with the ex-minister, he witnessed him asking his police orderly to arrest a barber for overcharging him.

Gaiya said he was paid N70,000 by Fani-Kayode but was not given any food while workers were not allowed to leave the premises.

He said, “At different times, I have been sacked, beaten, abused, assaulted whenever I was caught sneaking out to buy food.

“On one particular day, Chief Fani-Kayode attempted to hit me with his slippers because I slowed down to take a sharp turn (while driving). He accused me of planning to cause him harm and demanded that the police carry out an investigation on me.”

Gaiya alleged that anytime any of Fani-Kayode’s cars developed a fault, the ex-minister would deduct his salary and use the money to pay for repairs

Another domestic servant, Agbolo Edah, who is from Togo, said Fani-Kayode beat him up and tore his clothes because he was not satisfied with his cooking.

The cook said the working conditions at Fani-Kayode’s residence were horrible during the four months he worked there.
Edah in his affidavit stated that domestic servants were usually not allowed to leave the compound and were denied food.

The cook said, “I was assaulted at the slightest provocation while working for Chief Fani-Kayode. He would direct his guards to strip me naked and beat me up.

“I recall being pinned to the ground while Chief Fani-Kayode beat me up and kicked me continuously with his leg. I also witnessed Chief Fani-Kayode strip his staff completely naked on the allegation that they stole from him. He sometimes drags his staff to the police station where they were detained for days.”

A cook, Emmanuel Oko, said the ex-Minister once chased him around the house with a knife because he was not happy with his cooking.

Oko, who worked for the ex-minister for six months, said his salary was N150,000 but Fani-Kayode was fond of deducting his salary.

He stated, “Chief Fani-Kayode is a paranoid soul that gets angry for no reason. There was a time he held a knife and was walking around the table and said ‘I will kill you now’, ‘I will send you to hell now’.

“I would be running around the kitchen while his police orderlies would be watching,” he said

Also, a nanny, Anthonia Uchenna, who once worked with Fani-Kayode, says the ex-Minister once ordered his bodyguards to strip her naked and flog her.

She said the ex-Minister had used the police to detain her on several occasions.

JUST IN:Nigerians Can Live Anywhere In The Country If They Are Not Criminals—Yoruba Council Of Elders