OPINION: The Downfall Of Gov. Okorocha, A Bitter Lesson To…

IPOB responds to attacks on INEC offices; ESN has no…

WHO ARE YOU TO SUMMONED BUHARI OVER INSECURITY”Expect EFCC Invitation, Freezing Of Account”—Fayose Blast Lawmakers 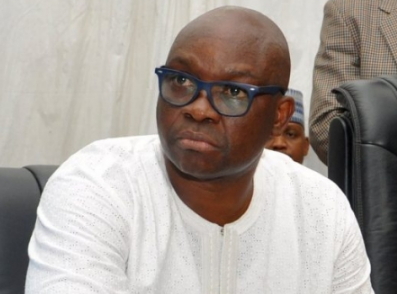 A former Governor of Ekiti State, Ayo Fayose, says members of the House of Representatives who asked President Muhammadu Buhari to appear before the House should expect to be harassed by the Economic and Financial Crimes Commission.

“I will be surprised if the President honours the House of Reps’ invitation,” Fayose tweeted on Tuesday. “The National Assembly that is supposed to represent the people should know by now that in the eyes of this President, they only exist on paper because they are mere toothless bulldogs.

“Some of those Rep members should expect an EFCC invitation, freezing of their accounts or arrest for plotting to bring down the legitimate government of the President. I warned.”

Some of those Rep members at the forefront of the invitation of the President to appear before the House should expect EFCC invitation, freezing of their accounts or arrest for plotting to bring down legitimate government of the President.

The lawmakers had on Tuesday resolved to summon the President over the killing of more than 40 farmers in Borno State last weekend.

ALSO READ:  2019 ELECTIONS: US Ambassador Speaks Elections And The Trends Of Results

The farmers were attacked in Zabarmari area of Borno State by suspected members of Boko Haram, an Islamic terror organization.

The decision to summon the President followed a motion by members of the House from Borno who insisted that Buhari had to address them at the plenary.

Northerners Lamented over Wasting Their Votes On Buhari In 2015, 2019, Northern Groups Say