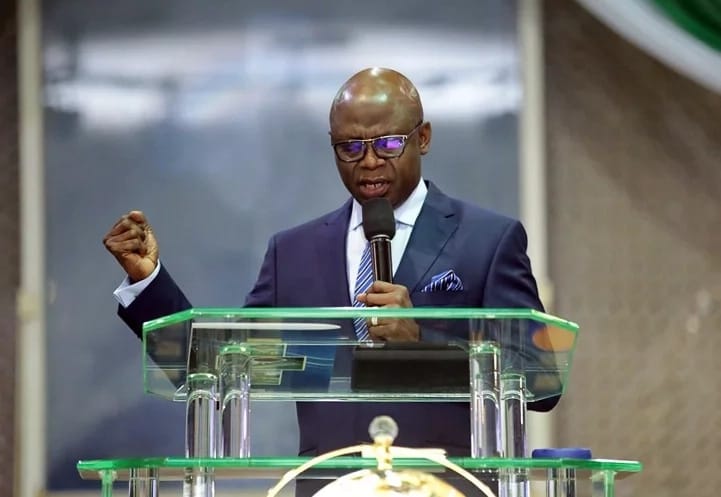 The Senior Pastor of the Citadel Global Community, Lagos State, Tunde Bakare, has dared a former Minister of Aviation, Femi Fani-Kayode and the spokesperson for Yoruba socio-cultural group, Afenifere, Mr Yinka Odumakin, to expose his “supposed ugly past and feel free to publish it”.

Bakare on Tuesday for the first time, reacted to the statements he made about a former Governor of Lagos State, Asiwaju Bola Tinubu, saying that Fani-Kayode was in the grip of Satan when he (Bakare) ministered Jesus Christ to his mother in the recent past.

Fani-Kayode had on Monday called out Pastor Bakare over the accolades he gave to the National Leader of the All Progressives Congress, Tinubu, noting that he did not know “who was dragging Bakare’s balls.”

Fani-Kayode had said, “On October 28, 2019, Pastor Tunde Bakare said the following, ‘Tinubu will give account for all his deeds. He should not be seen as a generous man; he is an integral part of the rot in Nigeria.’

“Curiously, just one year and two months later, on December 20, 2020, the same Tunde Bakare changed the music and said the following about the same man.

“He said, ‘People should see Tinubu as a Yoruba hero, he shouldn’t be vilified. Like Jephthah the Gileadite, he has fought many battles on behalf of the Yoruba people and won despite his rough beginning and God does not need anybody’s permission to put such in his hall of fame despite their past deeds and ancestry.’”

“Is he being blackmailed? Are his balls being squeezed by a hidden hand? Is there a deep secret somewhere that we know nothing about and that they are dangling over his head like a sword of Damocles?

“Could this volte face have been motivated by the fact that an unsavoury event which allegedly took place in 1990 in the life of the pastor was about to be exposed by the Tinubu camp? I’m not making any allegations here: I’m only asking a question.

“Again, could it have anything to do with an allegedly ugly situation with a bank whose ownership recently changed hands?” Fani-Kayode further said.

Similarly, the Afenifere spokesperson described Bakare’s accolades for Tinubu as displeasing, while questioning the morality of praising him.

In his column in a Nigerian newspaper, Odumakin wrote, “It is the very height of the abuse of the rostrum for a pastor to say to us no matter how God-forsaken the country has become that if somebody is accused of being a thief, the rest of us should go and become thieves as well.”

In a statement he personally signed on Tuesday, Pastor Bakare dared Fani-Kayode to expose the supposed ugly past he (Bakare) had.

Bakare said, “Good morning Yinka, Hope you are much better?  I have just read Femi Fani-Kayode’s piece where he quoted you and others.

“As he described you affectionately as his brother in the piece, I believe you are either companions or must be in the same league or camp.

“I have only one appeal to make through you to him: Tell him to expose my supposed ‘ugly past of 1990’ he must know about and the shady deals involving some bank that just changed hands that involved me in any shape or manner.

“If Femi does not do so as soon as possible then he has published deliberate falsehood about me. I will await this publication soonest.

“For the sake of Femi’s mother, who I ministered Christ to in their Papa home while Femi himself was still in the grip of Satan, I will hold my peace for now.

“My last word to you and to the likes of Femi is that 10,000 times 10,000 of Tinubu or any one for that matter has nothing on me to make me say the words I spoke for and against him either in the past or now.”

Bakare noted that no one in Nigeria “or elsewhere in the world can blackmail me over anything done in the past to anyone or with anyone”.

“If you or him or any other person know of any shady deal that I have done with any individual, corporation or government, please feel free to publish it.

“Yinka Odumakin, I cannot thank you enough for reading this long epistle in your present state and for distributing same on your different platforms.”

You’re Not God So I’ll Give You Fire For Fire, Fani-Kayode Replies Pastor Bakare