See Attack On Ekweremadu As A Way Of Fighting Corruption… 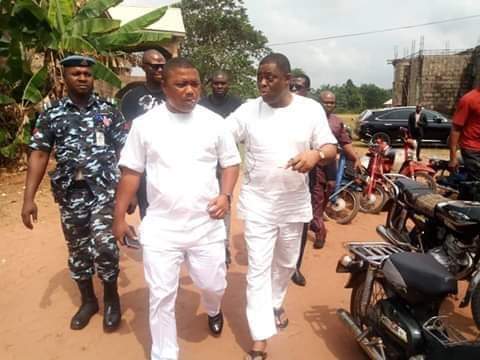 SAHARANEWS – I was in Orafite, Anambra state yesterday with my friend, lawyer and brother Barrister Ifeanyi Ejiofor who happens to be Mazi Nnamdi Kanu’s lawyer as well.

This morning as I was about to enter the Federal High Court in Lagos I received a phone call from him and he told me that his Orafite home had been stormed by the police.

He said a total of 4 people, including the young man that led me to his home from the traditional rulers palace had been killed and that his family were badly brutalised and traumatised.

ALSO READ:  PHOTO NEWS: Fulanization Of Nigeria, Which Of These Buharis Are We Talking About In Nigeria? - See Photos

Ifeanyi buried his brother just four days ago, his family are still mourning and now this! May God judge those behind it!

Since the call he made to me this morning no-one, including his wife and children, have seen or heard from him. I pray he is safe and well.

I was told that two policemen were also killed during the course of the raid. I call for peace and restraint from all sides.

I call for peace and restraint from all sides.

The shedding of innocent blood is a great evil and I wholeheartedly condemn it. It is a terrible thing that has drastic, long-term and calamitious consequences for those that indulge in it and those that live and rule by it.

May the souls of all those that were killed this morning rest in peace and may God restore sanity and respect for human life to our country.

Those that rule by tyranny, brutality and the power of the gun shall not prevail.