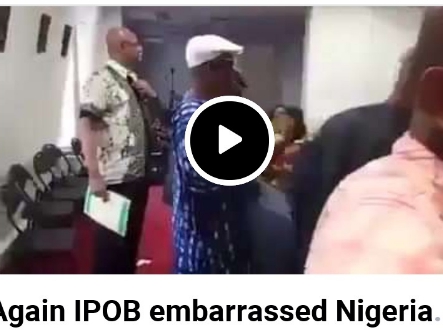 SAHARANEWS – The Ministry of Foreign Affairs has dismissed a video circulating on the social media, purporting to show disruption of a meeting the Minister of Foreign Affairs, Geoffrey Onyeama, was holding with some members of the Nigerian community in the Embassy of Nigeria in Vienna, Austria.

The ministry explained that the incident captured in the video took place three years ago, adding, however, that Onyema was not harassed out of the venue as speculated.

The MFA spokesperson, Ferdinand Nwonye, clarified in a statement in Abuja on Friday that a group of no more than five individuals had complained that they were not given the opportunity to speak during the interactive session.

In a related manner, the special counsel for IPOB, Aloy Ejimakor, has rebuffed a statement credited to the leader of the Ndigbo in Germany, Mr Ogechukwu Nsofor, that IPOB would lose 70 per cent of Igbo in the European country.

According to Ejimakor, “The so-called Igbo leader in Germany is wrong that IPOB will lose the support of the Igbo in Germany. I think Nigerians, particularly the Igbo, need to see the Ekweremadu incident in Germany from the prism of German law.”