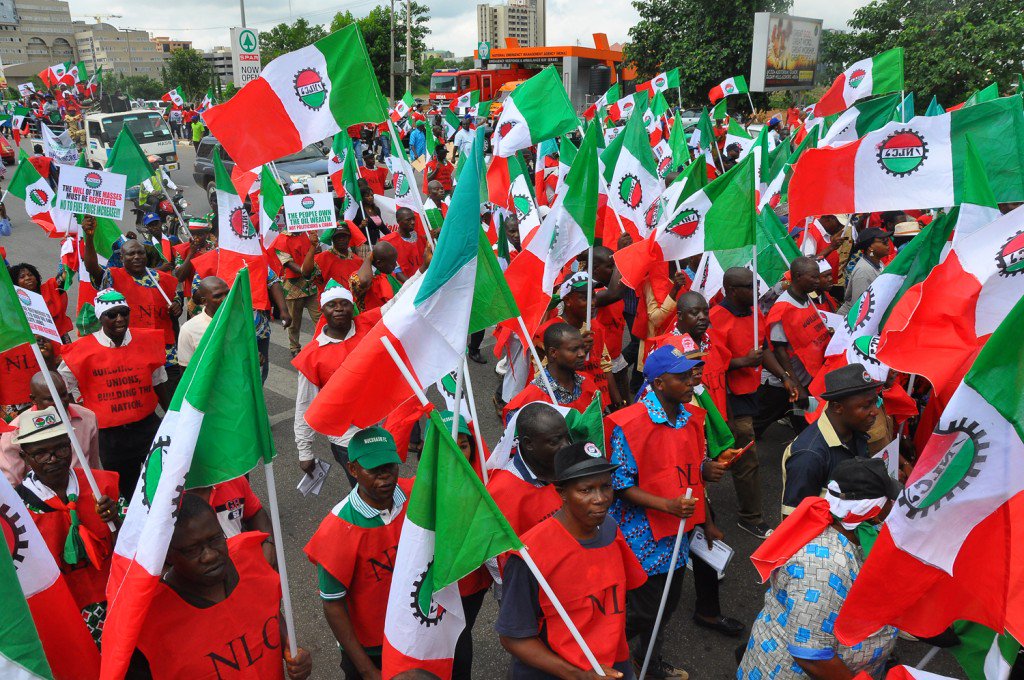 The Federal Government on Sunday night granted concession to Labour to avert the strike in protest against hike in petrol price and electricity tariffs.

An industrial action spearheaded by the Nigeria Labour Congress (NLC) and the Trade Union Congress (TUC) would have commenced on Monday.

But at an emergency meeting Sunday night at the Presidential Villa, the government agreed to suspend the electricity tariffs which the Distribution Companies (DisCos) announced on September 1, for two weeks.

A seven-man committee to draw up rates acceptable to all stakeholders was set up – to report back in two weeks.

The meeting, which started about 8pm, was on break at midnight.

The Federal Government team to the parley led by Minister of Labour and Employment, Dr. Chris Ngige. With him were Ministers of Petroleum Timipre Sylva, Information and Culture Lai Mohammed, Power (State) Goddy Jeddy-Agba, Labour and Employment (State) Festus Keyamo and Secretary to the Government of the Federation Boss Mustapha.

Although the government said it had made a lot of progress regarding how to cushion the effect of subsidy removal, the issue of electricity tariff remained in the balance before the meeting went into technical session.

The government also agreed to provide some palliatives to cushion the effect of the decisions.

Some of the palliative measures include:

In his remarks before the meeting went into technical session, Mustapha said government had resolved virtually everything that was on the desk in the area relating to deregulation of the downstream sector of the oil and gas and the increase in the tariff.

He said there were still outstanding issues with regards to power that were raised by labour as to the conflicting information they have regarding the tarrifs as applied in different areas under different power Distribution Companies (DisCos).

Mustapha said: “When we met last week, we had very robust discussions, we had very instructive insights into the issues.

“Adjourned in the sense that what do we do during these processes of the validation exercise which was supposed to run for two weeks and I believe this meeting can be narrowed to that this evening so that we can have a very quick resolutions to the outstanding matters and to allow you to go back to your respective constituencies.”

Wabba said the congress had not been served any court order.

“We are here again because when we met here on Thursday, we could not conclude the discussion. First is the fact that government presented their positions, we also presented ours. Therefore, it was concluded that there was need for consultation and the meeting was adjourned till Monday.

“As you said, this particular session was conveyed under emergency circumstance because all of us are committed to social dialogue, that is why we are here. Some of our colleagues missed their flights, so, they could not join us.

“I think it is good for me to respond to one or two issues. One is the judicial process that the honourable minister of labour mentioned. Let me say clearly, that as we sit here, labour has not been served any process.

“Let us not forget that because, we Labour unions are passionate about this issue, particularly the hike in electricity tariff, remember we had to seek judicial pronouncement and as I speak here, there is still a subsisting court judgement of the  Federal High Court in Lagos that said the increase is illegal, therefore, it should be set aside. I’m not sure that judgment has been respected up till today.

“I’m not saying because of that, if there are clear-cut issues we cannot proceed. I think we must also understand the context. If we are on the negotiation table, and we have come to the table with open minds, and the commitment, I think we should emphasise the issues that are on the table instead of trying to divert our attention by referring to a process which are not known to us.

“We are ready for social dialogue and certainly as we said, we should actually start from where we stopped. I think that is how to make progress in a meeting.”

Ngige said the government had to convene an emergency meeting because of the court orders preventing tomorrow’s planned strike.

He said: “There is a new development, a judicial process was served on us by a civil society organisation asking us to make sure there is no strike. So we felt that because of those issues and our date to convene tomorrow (Monday) were no longer tenable.

The TUC President said it was wrong for the federal government to secure a court injunction when labour was already negotiating with it.

“We accept to be here because in the culture of Labour, whenever we have issues. I want to appreciate the government for coming to the table to dialogue with us and giving us the attention we require. That shows that we have some stake in this country too. It was wrong for government to have sponsored people to protest at the Unity Fountain that the labour movement should not go on strike.

“Labour is not afraid to go to court to challenge the injunction obtained by government but we have not been served.”

But Ngige asked Olaleye to provide proof that government sponsored some civil society organisation to obtain a court order to halt the planned protest.

“I know that he who alleges must proof, it is a very weighty allegation against the government, as far as I know, we are not aware of such a situation,” he said.