2023: My husband only candidate with strong support for… 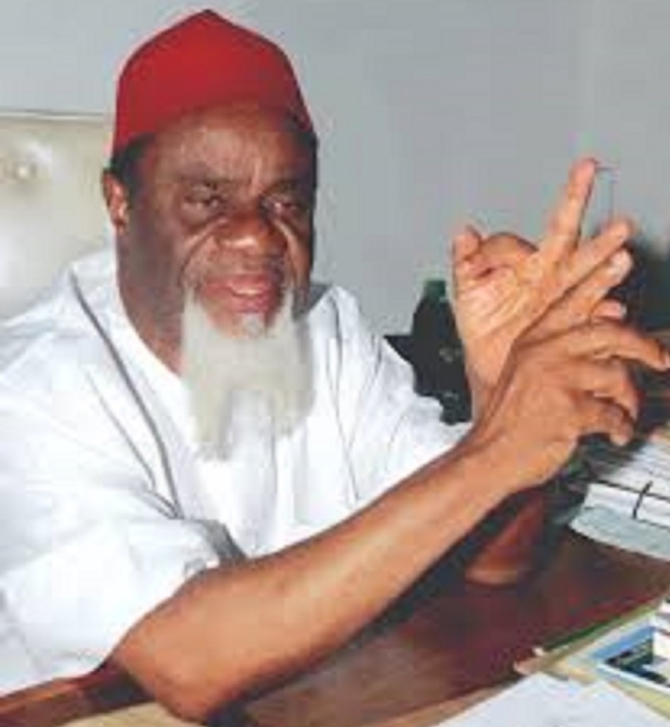 SAHARANEWS :Former Governor of Anambra State, Chukwuemeka Ezeife, has said that the elderly people in South East may embrace the Nnamdi Kanu-led Indigenous People of Biafra, IPOB, if the other parts of Nigeria conspire and deny the zone Presidency in 2023.

He also said that the agitation and crusade being carried out by Mazi Nnamdi Kanu and his group for a Biafra referendum were forced on Ndigbo by the country.

Ezeife accused the Nigerian government of making deliberate efforts towards pushing the Igbos out of the country by denying them occupying sensitive positions including leading any of the security agencies.

He told Vanguard: “You can’t beat a person and say don’t cry. What Nnamdi Kanu and others are doing is crying because they are beaten and they are doing it in a way that is non-violent.

“Therefore, Nigerians should appreciate their method. I am happy the rest of the world, Europe, European Union, they met with Nnamdi Kanu and they saw point with what he was saying.

“So, I think Nnamdi Kanu is doing what is forced on us (Ndigbo) because some of us believe that we should find out more mature ways of going about it.

“But the ideal is very lawful, they are crying for a referendum, that is a democracy. I think if Igbo people are denied the Presidency in 2023, then, no matter how unpopular IPOB may be among the older people everybody may rush it.”

On the 2023 Presidency and the agitation by the South West and the North to go for the plum position, he said: “If you want to deny them (Ndigbo) 2023 Presidency, then deny them citizenship of Nigeria.

“I am feeling that it is because of rejection that other Nigerians reject Igbo Presidency that (Mallam Nasir) el-Rufai wants to be President, that (Asiwaju Bola) Tinubu wants to be President and it will favour them. If that happens, the real meaning is that the Igbos should cease being citizens of Nigeria.

“That there is no point belonging where you are rejected. One rejected does not reject himself. Among those who reject you, you don’t want to force yourself to belong.

“So, there is this talk about Biafra. IPOB is promoting Biafra because of various problems and punishments against Ndigbo. Because of many problems cause the Igbos in Nigeria, they are trying to leave. But the Federal Government of Nigeria has been very busy pushing the Igbos out of Nigeria.

“We are traders, we import containers etc, but when our people import things, the things are seized and auctioned. Ibeto was one of the strongest people in cement, after some time, he was crippled. Instead of going up, he was going back to give advantage to Non-Igbo.”