JUST IN : I identify with Mazi Nnamdi Kanu because he is…

FLASHBACK: In 2011, General Buhari Called For A Revolution In Nigeria – See Details 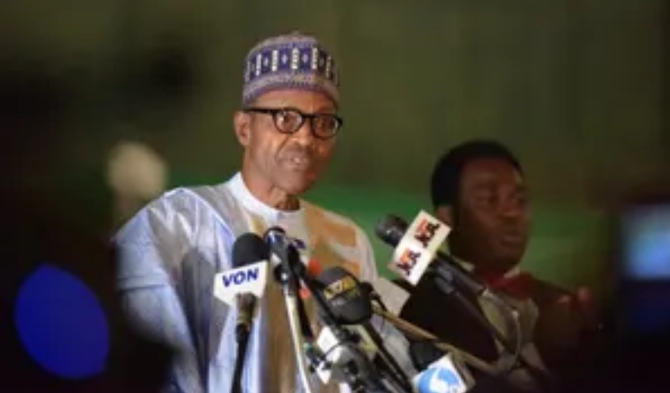 SAHARANEWS – In 2011, General Muhammadu Buhari, the candidate of the Congress for Progressive Change (CPC), called for a revolution in Nigeria — albeit through theballot.

Via a statement by Yinka Odumakin, his spokesman at the time who has now turned to one of his fiercest critics, Buhari asked Nigerians to make exceptional sacrifices to assert their collective will in the country.

“The Egyptian pro-democracy campaigners defied all odds toachieve their set goal of terminating the 30-year old grip on power by Mubarak. Their tenacity has again confirmed the truism that no force on earth can stop a people determined,” he said.

This was not the first time the president called for mass action — he did the same in 2003, after losing the presidential election to incumbent Olusegun Obasanjo of the Peoples Democratic Party (PDP).

In June 2003, supporters of the All Nigeria Peoples Party (ANPP) and Buhari, began a mass protest against the outcome of the April 19, 2003 presidential election in Abuja.

The protesters were reported to have massed at the Court of Appeal, venue of the Presidential Election Petition Tribunal to witness the proceeding.

They would later spill over to the streets where they chanted anti-government slogans against the Olusegun Obasanjo government.

In the same statement calling for a revolution in 2011, Buhari commended the Egyptian military for refusing to attack “the forces of change”.

“The military in Egypt showed exemplary conduct with the way they refused to be used to attack the forces of change,” Buhari was quoted to have said.

“They showed the whole world that there is a clear difference between the state and those who temporarily occupy political offices for a fixed tenure. This is a lesson for our security agents who have been used to subvert the will of the people at elections in recent past.

“The time has come for our own security forces to demonstrate similar valour by putting national interest above that of individuals when there is a clash between the two.

“Unlike the Egyptians who went through self-denial for 18 unbroken days to achieve theiraspiration for leadership change, Nigerians just have to take their voter cards, vote on each election day and ensure that their votes count and are properly counted.

“It is time to demonstrate people’s power to free our country from those who have held it hostage for the last 12 years and are threatening to keep it so for 60 years.”

The CPC flagbearer commended the revolutionaries in Egypt, asking Nigerians to emulate them and support themselves regardless of religious divides.

“More importantly Nigerians have to learn from the way faiths integrated to achieve nationalaspiration. Christians formed rings round Muslims as they observed their Jumat prayers during the demonstrations,” Buhari said.

“For us as a people, we need to also move from balance of hate to balance of faith as the Egyptians practically demonstrated on the field of battle for change.

“Rather than allow ourselves to be divided by our faiths, we must emphasise what binds us together and areas where the shoe pinches us collectively as people with common humanity. With all sense of modesty, this is part of what the Buhari-Bakare candidacy represents.”

Omoyele Sowore, the convener of #RevolutionNow, was arrested by the Department of State Services (DSS) for planning civildisobedience — once commended by Buhari.

The policehas described the planned civil disobedience as treason and terrorism. In Buhari’s defence, his supporters claimthat Buhari only called for electoral revolution.

He asked Nigerians to “draw the right lessons from the 18-day revolution which saw Hosni Mubarak quitting office after 30 years; and do the needful to effect a regime change in Nigeria at the April polls”.

Since winning elections in 2015, Buhari has asked Nigerians to stop addressing him as a general but simply as president — with his handlers stating he has become a reformed democrat