BREAKING: Aso-Rock Restless, Buhari Yet To Be Sighted In…

Focus on ending insecurity instead of attacking me — Ortom tells Presidency 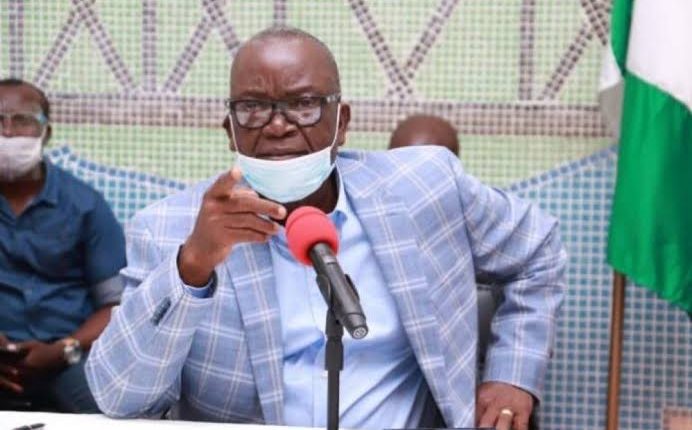 Samuel Ortom, governor of Benue state, has asked the presidency to focus on ending the killings of innocent Nigerians, instead of attacking him.

The governor made this known in a statement issued by Terver Akase, his chief press secretary, on Thursday.

The presidency and Ortom have been at loggerheads in the past few days.

The governor had in a recent interview accused President Muhammadu Buhari of trying to “Fulanise” the country, while reacting to the president’s approval of the recommendations of a committee to review 368 grazing reserves across 25 states in the country.

Responding to Ortom’s comment, the presidency accused the Benue governor of “using language reminiscent of the Rwandan genocide” to cause the deaths of Nigerians.

In reaction, Ortom said he spoke the minds of many Nigerians on the “specific areas of failure of the presidency and its complicity in the heinous crimes committed against citizens by armed Fulani herdsmen and other terrorists”.

Ortom insisted that he stands by his comment and won’t keep quiet.

“The governor spoke the minds of most Nigerians on specific areas of failure of the Presidency and its complicity in the heinous crimes committed against citizens by armed Fulani herdsmen and other terrorists,” the statement reads.

“Instead of taking the Governor on those points, Shehu went chasing vain and mundane matters in a desperate attempt to malign the Governor.

“We demand an apology from the presidency for accusing governor Ortom of stirring ethnic tensions and calling for genocide. The presidency has never hidden its hatred for the governor and its latest outing only confirms that fact.

ALSO READ:  Why it is wrong to declare Fulani bandits as terrorists — Femi Adesina

“We are aware of the presidency’s plot to cause crisis in Benue and make the state ungovernable and declare a state of emergency. Whenever each of their plans fails as it happened with the impeachment attempt on the governor before the 2019 elections, they resort to cheap blackmail.

“They accuse governor Ortom of making a law to chase Fulanis out of Benue; a claim that lacks substance and only goes to prove that they have not read the Open Grazing Prohibition and Ranches Establishment Law of the state. They can’t justify their narrative that Governor Ortom hates Fulanis when some of his appointees are Fulani.

“We advise the Presidency to focus on ending the killing of innocent Nigerians, fix the economy as it promised and stop the stinking corruption under their watch.

“They can’t run away from their responsibility. They were brought to power to serve the country not to oppress the people and suppress their freedom of speech.

“They are on record to have publicly promised during their campaigns before the 2015 elections that they would respect the rights and freedoms of Nigerians if elected. Sadly, what the people of this country have got from the current government is the opposite of that promise.”

Things getting worst in Nigeria, we need to negotiate our unity — Sultan