A Northerner Recently Asked Per Obi On A Radio Program What…

Fulani Herdsmen Staying Behind As Their Wives, Children Move Out Of Ogun Communities – Resident 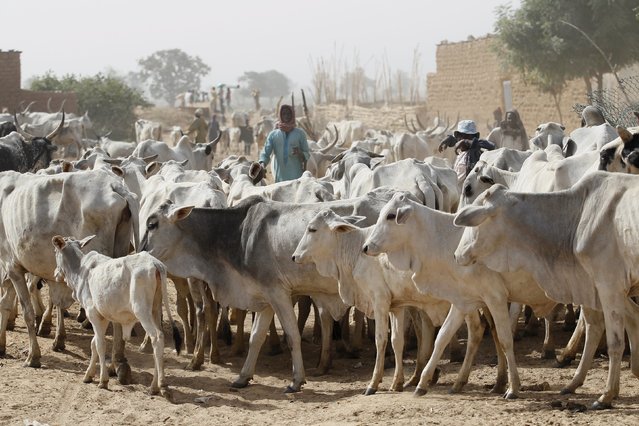 A resident of the Igbogila community in Ogun State, Mr. Akinola Kojekun, has said Fulani herders still roam freely with their cattle, destroying farmlands despite the ban on open grazing in the South-West region.

He said it happened again on Monday morning when his neighbour got to his farm and discovered that his two-hectare maize farm had been destroyed by cattle.

Regarding the herders/farmers’ current crisis in the South-West, Kojekun told SaharaReporters on Wednesday that there was no solution in sight.

“A neighbour told me that he got to his far early Monday morning, and was shocked that his maize farm of two hectares had been destroyed by herdsmen’s cattle,” Kojekun said.

He, however, said wives and children of Fulani herdsmen were seen packing their luggage and leaving some communities in the area.

“It seems they are vacating after Sunday Igboho’s visit to Eggua. Early in the morning, their wives and children are seen packing their loads and leaving our communities. They go in their numbers like that but their husbands are still around perpetrating their criminal activities.”

But according to him, the police are not doing enough to secure the lives and property of the people in the affected communities.

“I heard the police arrested a farmer that has a licensed gun to protect himself against killer Fulani herders. They were questioning him to know gave him the license whereas the criminals on a rampage, killing people with AK-47, are walking freely,” Kojekun said.

Similarly, a resident of Eggua community, Olugbenga Popoola, explained that attacks carried out by killer herdsmen must be premeditated as they must require having strategies and studying the terrains of the affected areas.

“I think these Fulani herders plan their attacks during the day. You will see them on motor bikes during the day, moving from one farm to another without cows. They must be surveying the farms and the (road) network.

“In the night, maybe they divide their cattle and move them around to graze the farms. By the time we wake up in the morning, one will be shocked how cows have destroyed farms,” Popoola said.

Regarding the ban on open grazing in the South-West region, Kojekun said state governors and Yoruba traditional rulers in the region should unite and support Sunday Igboho.

“All the Yoruba Obas should speak with one voice to drive these criminals out of our region. The governors also have a huge role to play. They should support people like Sunday Igboho and Amotekun security outfit for us to have peace,” said Kojekun.

Igboho, a self-acclaimed freedom fighter, recently gave a seven-day ultimatum to Fulani herdsmen to leave some parts of Oyo and Ogun states, where they have been blamed for the killing and kidnapping of members of their host communities.