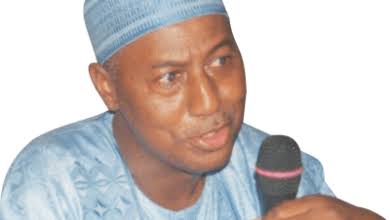 Ex-Governor of Kebbi, Saidu Dakingari, has demanded that the government return to the Fulanis all lands belonging to them to foster peace and unity.

He also called for the revival of cattle routes and grazing reserves.

Mr Dakingari, who is also the Fulani Elites Steering Committee chairman, suggested that the Kebbi government should proffer plausible solutions to insecurity during the forthcoming third tranche of the meeting.

He commended Governor Atiku Bagudu for his efforts to restore the state’s lost glory and make the state a true pacesetter and trailblazer in the country.

ALSO READ:  Ohanaeze: 'North Is The Safest Place For Igbos'

Mr Dakingari assured that the committee would follow up all the matters raised as recommendations in dealing with issues, stressing the need for justice, equity and equality to all Fulanis as a panacea to peace and security.

”All lands belonging to Fulanis should be returned, cattle routes and grazing reserves revived,” the former governor stated. “I advise the government as a matter of importance to issue certificates of land ownership to Fulanis as was the case before.”

The governor noted, “Government is fully aware of issues raised, just as it has already started implementing some of the recommendations raised by the committee.

“No matter the efforts put in by the government, there has to be the understanding and acceptance of those concerned to have a positive effect on their lives.”

Also speaking, the Emir of Gwandu, Bashir Ilyasu, represented by Sarkin Gobir of Kalgo, Haruna Jadda, assured Mr Bagudu of their support as traditional rulers towards achieving peace in their domains.

How we rescued 36 stolen cows in Katsina — Police