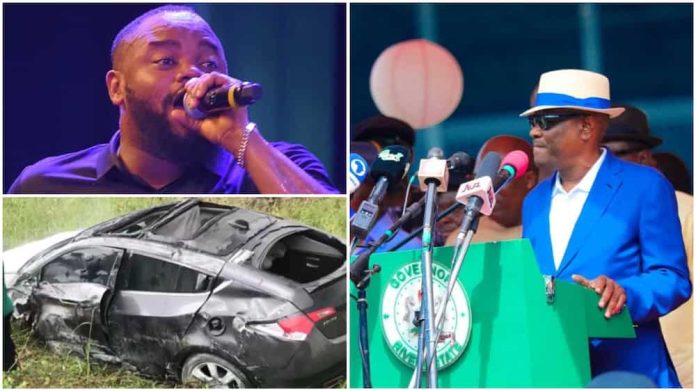 Sensational Bamidele, a gospel artist from Port Harcourt who also leads the live band that performs at the Rivers State Governor Nyesom Wike’s project commissioning ceremonies, has survived a fatal car accident.
After performing at the ceremony yesterday, Bamidele, who is from the Okirika Local Government Area of Rivers State, was involved in an accident on the road that Governor Wike had commissioned.
Before colliding head-on with an approaching vehicle, he had just left the location of the road’s commissioning in the Rumuodogho 1 and Rumuodogho 2 communities of the Emohua Local Government Area.
The accident reportedly resulted in the deaths of three people.
The vocalist, in a Facebook post affirmed the passings, however didn’t give the setback figure.
While he and his crew are alive, he claimed that the deceased were passengers in the vehicle who conspired with him.
It is said that the hospital is treating Bamidele.
The popular songs “As e dey sweet us, e go dey pain them” and “Wike dey come” are among the many that the singer and his group of young talented singers and instrumentalists are known for freestyling at the commissioning of projects and sometimes at PDP rallies.
N/B:The images below may be disturbing to some readers, so please exercise caution when viewing them.
https://www.facebook.com/100044201451389/posts/pfbid0kCZJU1n2gdNBa52GURkdPKAYYvtNNbMfmWMen1pLuXdXs7N7hcFzVWNk1fZwrLSRl/?sfnsn=scwspmo&mibextid=6aamW6

ALSO READ:  Nigeria Is On a Path of Destruction Under Buhari Govt – Bishop Kukah