JUST IN : Gtb in distress as Supreme Court orders them to… 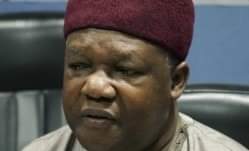 Southern Youth Forum, SYF, alleged that a former vice-governor of the Central Bank of Nigeria, Dr Obadiah Mailafia, who died on Sunday, was “poisoned”.

The group said that the activist who died from a brief illness was poisoned by those seeking to conquer Christians and Islamize all of Nigeria.

“Dr. Mailafia was a voice for many citizens of this country, especially Christians in the Middle Belt and South. There is more to his death than what they told us,” said Dezia Kue, spokesperson for SYF.

“Everyone in this country knows those who murdered him, they are those who seek to conquer the Christians and to Islamize all of Nigeria. They saw him as an obstacle for always exposing them,” Kue told OAK METRO on Tuesday.

Before passing away at the age of 64, Dr Obadiah Mailafia remained a staunch critic of the government and had trouble with the regime of the president, Major General Muhammadu Buhari (retired) and some northern politicians who, according to him, sponsors jihadists to terrorize and kill Christians in Nigeria.