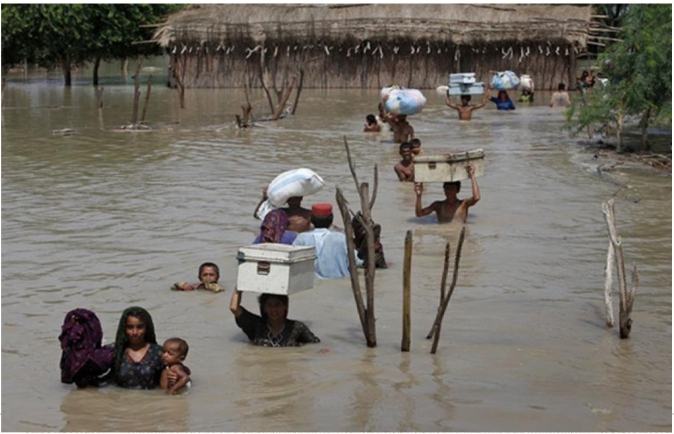 SAHARANEWS – No fewer than 150 persons, rendered homeless by flood in the Northern zone of Bauchi State are currently taking refuge in a temporary IDPs camp set up by the government.

SaharaNews reports that at least 50 houses and properties worth millions of Naira were destroyed by the flood caused by a heavy downpour in Disina District of Shira Local government area of Bauchi. The same incident also washed-up hundreds of farmlands and houses in Zaki and Gamawa local government areas Bauchi.

While assessing the flood situation which has continued to ravage communities in Bauchi State, the State Governor, Senator Bala Abdulkadir Mohammed pledged to come to the aid of the victims.

The Governor gave the assurance when he led top government officials on a sympathy visit to the District Head of Disina, Alhaji Abdullahi Mustapha in his palace on Saturday.

Bala Muhammad, who was represented by the Speaker of the State House of Assembly, Abubakar Suleiman who is Acting on his behalf since he traveled for the 2019 Hajj, said to ensure timely government intervention, the State Emergency Management Agency (SEMA) has already conducted assessment of the damages caused by the disaster and will act accordingly.

The Governor, sympathized with the victims of the flood disaster and urged them to consider it as an act of God, calling on them to take precautions by ensuring that water ways were not blocked.
The Member representing Disina Constituency at the State House of Assembly, Alhaji Saleh Hodi Disina expressed gratitude to the Governor for his quick response less than 24 hours of the incident.

Earlier, the District Head of Disina, Alhaji Abdullahi Disina said the major challenges facing the area is flood disaster and appealed for government’s support in that direction.

The District Head who said the recent flood disaster has affected houses and farmlands, suggested for immediate construction of culverts and drainages to avert recurrence of the incident.
While at Zaki Local Government, Senator Bala Mohammed expressed shock on the number of houses and properties affected by the flood disaster in the area.

ALSO READ:  Man dumps fiancee for not bleeding the first time they were intimate

On his part, the Caretaker Committee Chairman of the local government, Alhaji Yahuza Abdulkadir appealed for immediate government support to the victims in order to alleviate their sufferings.

Some of the victims interviewed explained that for over 10 years now, their lives have being threatened by the flood and called on the government to come to their aid