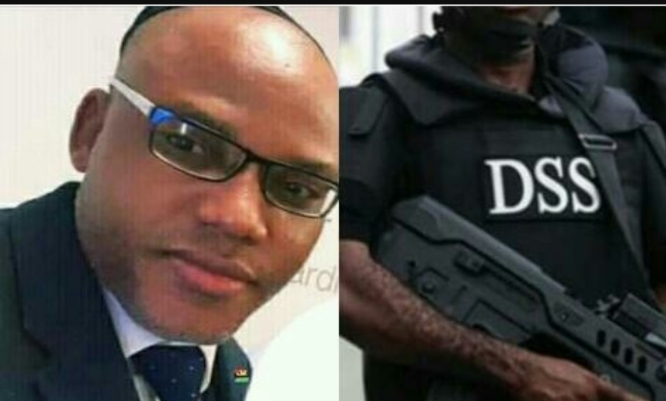 SAHARANEWS – The leader of the proscribed Indigenous People of Biafra (IPOB), Nnamdi Kanu, has alleged that operatives of the Department of State Services (DSS) harvest human organs and sell it to India.

The secessionist leader made the allegation during a live broadcast on Radio Biafra on Saturday evening, April 6.
According to the IPOB leader, if someone is arrested by the DSS and “nobody asks of you, they will harvest their organs and sell it to India.”

Speaking further, Kanu alleged that IPOB sympathizers, Justice Ude, Emmanuel Chigbo and Uchenna Emenike will be killed by DSS operatives and “their parts” sold to India if “no one comes for them.”
Blesses Nnamdi Kanu, Says ‘You’re The Hope Of Ndigbo’
Kanu alleged that harvesting and selling of human parts of those arrested by the security operatives in Nigeria is what is going in “SARS, DSS and police cells across Nigeria.”

His words: “If you go to DSS cell you will cry because if they arrest your relative and nobody asks of you, they will harvest their organs and sell it to India.

“Justice Ude, Emmanuel Chigbo and Uchenna Emenike all taken to Abuja and if no one comes for them they will kill them and sell their parts to India, this is what is going on in SARS, DSS and police cells across Nigeria.”

Kanu is leading a group seeking secession from Nigeria. The group has since been proscribed by the Nigerian government

JUST IN: Saudi Arabia Replies FG Over The Execution Of Nigerian Woman, Says “The Law Is Known To All, No Apologies”