Sultan of Sokoto calls for dialogue in Nigeria, say war…

BREAKING: Soldiers flee as ISWAP takes over Rann in Borno,…

Hausa Fulanis Are Not Playing Fair, Rise Up And Defend Your Own Or…. – Fani-Kayode Urges Igbo Leaders 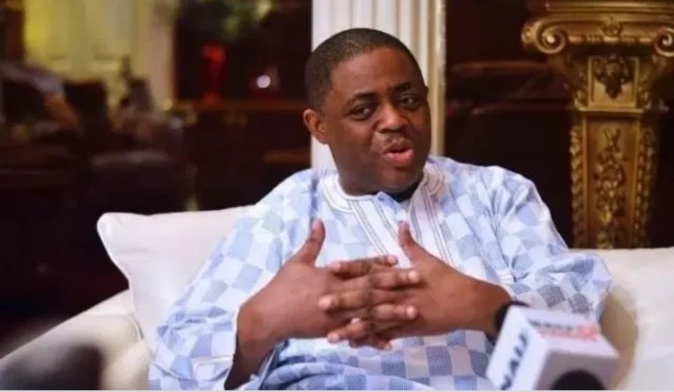 Mr Femi Fani Kayode(FFK) and his wife also paid a courtship visit to the palace of traditional ruler of Oraifite community in Anambra state, as he met with His Royal Highness, Igwe Daniel Orji and his cabinets who were all present during the visit.

FFK was welcomed officially by Igwe of Oraifite in accordance with Igbo traditions, One of the cabinets prayed with cola nuts.
Architect Kenneth Nnabuife Ndukwe (President of Nigeria seat of Builders) also the permanent secretary to the palace led the official introductions of all members of the Igwe’s cabinet.

Mr FFK made a lot of remarkable words during his brief meeting with the Igwe and his cabinets. He started with warmth greetings and salutations to all individuals within the palace. He also commended his good friend and legal counsel, Barrister Ifeanyi Ejiofor who took him to meet the Igwe of the community.

During his speech, He alarmed the Igwe to be very vigilant on the impending disaster that’s about to loom the country, specifically by the Fulani oligarchy who are also hell-bent in ensuring that the whole of Southeast and South South are conquered.

Mr Kayode made a lot of instances of the happenings within Yoruba land known as Odudua nation. The Fulani Janjaweed has filled up the entire forests across the Southwest geopolitical zone of the country, yet the traditional rulers are not sensitive to these ugly occurrences. The 94 year old leader of Afenifere had his daughter killed by the herdsmen, a lot of kidnapping cases have also been occurring.

He made historic references to the killings of the Igbo people in the past decades.
“On July 29, 1966, over 300 Igbo officers were massacred just in one single night in Nigeria and they said we shouldn’t talk about it. They killed people from hospital to hospital and no one has said anything on these atrocities. Thousands were killed during that period before the war broke out.” FFK lamented

He also said that almost all the major positions under Nigerian government are occupied by the northerners, including four principal officers of the upper and lower chamber of the legislature.

Mr Femi Fani Kayode also condemned the silence of governors and some traditional rulers in Igbo land who have refused to speak out against the incessant killings, kidnappings and massacres by the Fulani herdsmen.

He however urged the Igwe of Orafite to endeavor to get in touch with his fellow royal fathers and start as soon as possible to do the needful, otherwise history is bound to repeat itself.

“Every reasonable human being knows that war is likely to occur in Nigeria any moment, but in this case no one is exempted, it will affect both the rich and the poor, adults and children. But the only measure to resist it is by coming together among like minded and concerned persons to reaffirm a resolute decision” Femi Kayode stated.

He commended the IPOB (Indigenous People Of Biafra) and the leader, Mazi Nnamdi Kanu for their resilience and determination in fighting for their rights and for the sake of millions of Biafrans.

“Young men, strong men are ready to sacrifice their lives fighting against injustice, and this has only been proven by IPOB members which means IPOB are the real men. Therefore, let’s stand and support the real men” He said.

He rounded up his speech by appreciating the Igwe for the attention given to him, and also reintroduced his beloved wife who is a Biafran by blood.

Igwe Daniel Orji was overwhelmed by the educative address from the former Minister of Aviation. He applauded his intelligence and the historical references made, even as the Igwe noted that him and his subjects shall continue praying hard that things work out better for peace to reign in the country.

Barrister Ifeanyi Ejiofor expressed his gratitude on the eloquent speech made by Mr FFK and thanked everyone who defied all odds to be in the very gathering.