I’m disappointed Buhari lied to us that he will… 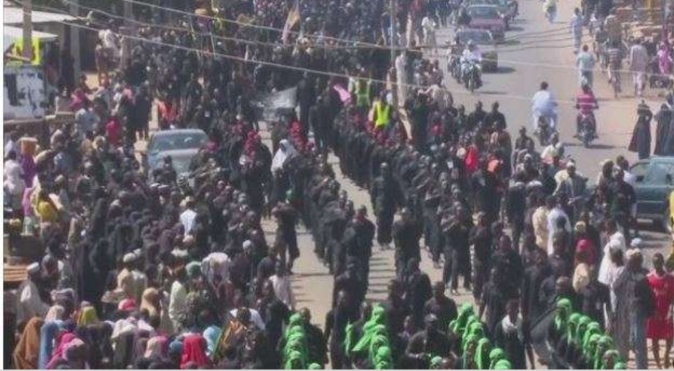 SAHARANEWS – The Nigeria Police Force and members of the proscribed Islamic Movement in Nigeria, also known as Shi’ites, may clash at the group’s upcoming Ashura procession on Tuesday.

The Ashura procession, also called the Day of Ashura, is the tenth day of Muharram, the first month in the Islamic calendar.

It is observed annually by Shi’ite Muslims worldwide to commemorate the death of Husayn ibn Ali in the Battle of Karbala in Iraq.

Known as the third Shia Imam, Husayn was the grandson of Prophet Muhammad (SAW) and son of Ali ibn Abi Talib, the first Shia Imam.

Husayn was said to have died during the Battle of Karbala, which was fought on October 10, 680 between his army and the army of the second Umayyad caliph Yazid 1.

Despite the fact that the Shi’ites group has been proscribed, it has dared the police and insisted it would observe the Ashura procession on Tuesday.

ALSO READ:  In the past few days, buhari has made IPOB and Mazi Kanu his main business, saying that:

However, the Nigeria Police Force had also dared the group to march and see what they (the police) would do.

The development came amid a recent directive from the Inspector-General of Police, Mohammed Adamu, for the arrest of all identified Shi’ite leaders across the country.

The IGP also directed a team of special police to dismantle the IMN structures in the country, vowing the police would not allow the Shi’ite group to violate its proscription by the court.

However, a highly placed member of the Shi’ite group told SUNDAY PUNCH that its members would troop out from “cities and villages” in the 19 northern states and Abuja to mark its annual procession in memory of Imam Husayn (the third imam of Islam revered by Shi’ites).

The source said IMN members had vowed it would observe its annual Ashura procession.

Confirming the move, the President, Media Forum of IMN, Ibrahim Musa, said some Shi’ites had already commenced the mourning procession in various cities, noting that no arrest had been reported so far.

He also said the IMN leaders and members had no plans to leave Nigeria or seek asylum in any country, noting that their leader, Ibrahim El-Zakzaky, had demonstrated love for Nigeria.

Musa, who doubles as the Shi’ite spokesperson, stated, “To date, there have been no arrests since we started the Ashura mourning procession in various cities and villages.

“We will join our Shia brothers worldwide in commemorating the killing of the Prophet’s grandson, Imam Husayn on the tenth of Muharram (Tuesday).

“Our leader, Sheikh Zakzaky, has demonstrated our love for our country. We would rather die here than leave since we are not criminals. Our procession will hold on Tuesday in Abuja and major cities in the North, Insha Allah.”

He stated the procession would be peaceful and hitch-free.

When asked what they would do if confronted by the police, Musa said, “Ours is a peaceful religious procession, that is why our women and children join us. So, if there is any confrontation, it is the government that may cause it, not us.

“We are ready to sacrifice our lives just as Imam Husayn did in Karbala. We are not going to war, we are going on a mourning procession which is a universal event on that day.”

The IMN spokesperson also explained that the order proscribing the group had been challenged, expressing the confidence that justice would be done in the matter.

I Just Found Out That My Boyfriend, My Pillar Of Support Is A Dustbin Parker.