ESN Raided Another Fulani Herdsmen Camp In The Same Aninri…

How Uzodinma caused the death of thousands of youths in Imo… 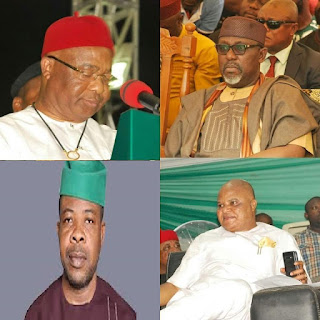 The incessant killing of innocent people in Imo state has alarmed the Indigenous People of Biafra, or IPOB. IPOB claimed that Ifeanyi Ararume, Senator Rochas Okorocha, Emeka Ihedioha, and former Governor Emeka Ihedioha were responsible for the murders and property damage in Imo state.

The entire statement is read:

The Indigenous People of Biafra (IPOB) movement, which is ably led by the great and indefatigable leader Mazi Nnamdi Okwuchukwu KANU, has gained the attention of the global family due to the high level of insecurity and banditry in the region, particularly in Imo State. The movement has information indicating that these individuals, as well as some others that are still the subject of an investigation, are to blame for the unrest and the murders of innocent Imo citizens. Rochas Okorocha, Ifeanyi Ararume, and Emeka Ihedioha are of the opinion that they will use common Imo citizens to wage their political war against Hope Uzodinma, the bloodsucker in IKONSO’S HOUSE, regardless of the impact on Imo citizens’ lives.

These men, Rochas Okorocha, Hope Uzodinma, Emeka Ihedioha, and Ifeanyi Ararume, decided that the state’s innocent citizens will not sleep with their eyes closed or have peace. They have significantly contributed to the suffering of the people of Imo State. Because they are the ones responsible for all of the political assassinations, property burnings, and the loss of people’s means of subsistence, IPOB will make certain that these individuals lose their political relevance.

ALSO READ:  NEW ZEALAND - Opposing the governments policies, including Covid measures, is a sign you are a terrorist.(video)

Since the illegitimate takeover of the Imo State government house by the Supreme Court Administrator in his capacity as governor, Hope Uzodinma and the other three individuals have carried out additional homicides in Imo State. In order to fulfill their political ambitions, political criminals made the decision to turn Imo state into a killing field by attempting to put every person there in great danger and suffering. It is unconscionable for these soulless vampires to continue using citizens of Imo as pawns in their evil chess game.

IPOB is urging all stakeholders in Imo state, including men’s and women’s religious leaders, traditional rulers, Umuada groups, and women’s organizations, to speak out immediately to save Imo State from these criminals who claim to be political leaders.

Rochas Okorocha, Ifeanyi Ararume, Emeka Ihedioha, and Hope Uzodinma’s political disagreements have grown into a full-blown internal conflict, resulting in collateral damage for the Imo people. None of the states in Biafraland are offering any meaningful responses to the insecurity that these men have brought to the state, which has grown significantly. Their political camps have divergent goals, but IPOB will not permit them to continue this absurdity.

We want every Imo State child to look into the vicious assaults on Ikenga Imo Ugochinyere’s house and the previous attempt to kill Ikedi Ohakim. Hope Uzodinma and Ebubeagu killer sqaud henchman Chinasa Nwaneri will continue to attack more people if Imo State Indigenes do not investigate these attacks. That vampire has mapped out other people, particularly Eze Leonard Nwokocha of Umunneato automonous Community in Aboh Mbaise, for elimination.

The fact that some traditional rulers, like Ochiri Okeke of Umudara Amaifeke, have become willing instruments in Hope Uzodinma’s hands and are supporting and assisting him in continuing to murder Imo people and violate their human rights is the most worrying aspect of the madness that is taking place in Imo State. Like these criminal politicians, traditional rulers, who are supposed to be people’s protectors and custodians of the vast land of Biafra, have sold their consciences. They used criminals and crooks to make Imo state unruly, and they won’t succeed.

ALSO READ:  A WORD IS ENOUGH FOR THE WISE: Atiku pushed me to handover Bakassi to Cameron, I never knew he was fighting for his father's land.--OBJ

The zoo’s security staff is also complicit in the heinous crimes that these criminals are committing in Imo state, but they allow it because it fits the Fulani’s plan to instill fear in Biafraland in order to pressure IPOB. These security agencies’ commanders and leaders despise Ndigbo and Biafrans.

Hope Uzodinma, Rochas Okorocha, Ifeanyi Ararume, and Emeka Ihedioha must resolve any personal disagreements they have with one another and stop using the innocent people of Imo State to advance their evil political agenda. We remind them that they also have families and veins that carry blood. This madness must end immediately because IPOB will not intervene if Imo people rise up against them.

Ohanaeze reveals plans to detain Simon Ekpa and declares that Igbos are prepared to pursue him after a $50,000 bounty.