“Our Women, Daughters Are Raped, Held Captive By…

How INEC, Lawyer Forged Documents To Push Out Sowore As AAC Chairman(video) 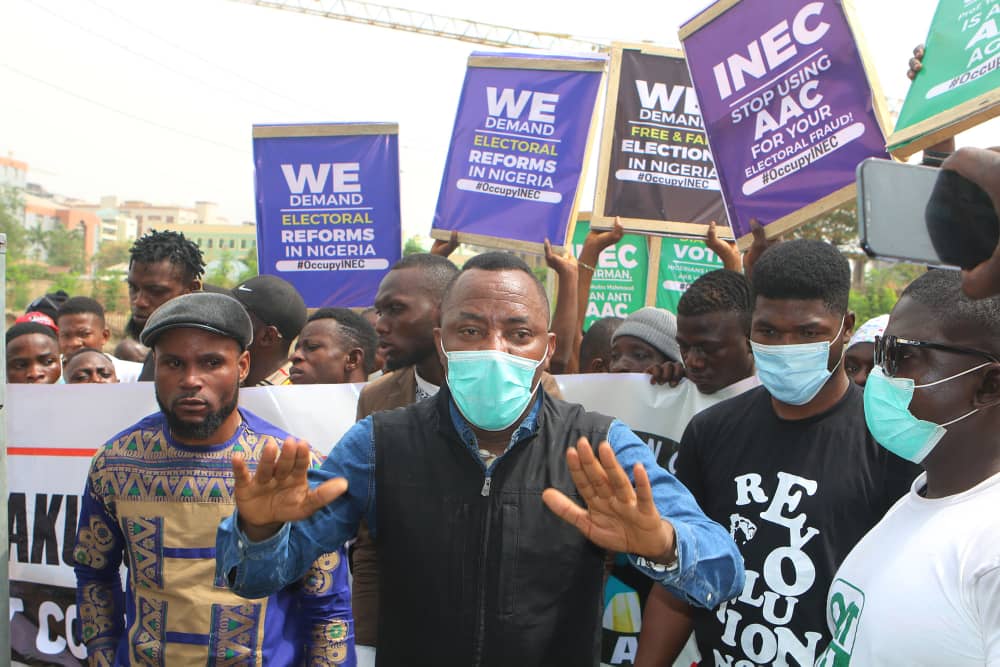 The Independent National Electoral Commission’s (INEC) and one of its lawyers, Emeka Ozoani forged different court documents to get a judgement against African Action Congress (AAC) presidential candidate in the 2019 election, Omoyele Sowore, SaharaReporters has gathered.

A Federal High Court sitting in Abuja had in 2019 sacked Sowore as the National Chairman of the AAC.

The judge, Inyang Ekwo, in his ruling, also validated the removal of Malcolm Fabiyi as the Deputy National Chairman of the party.

However, SaharaReporters gathered that Ozoani known in some quarters for doing dirty jobs for INEC, packaged a fake litigant to obtain the judgement for one Hon Bago.

“He forged documents used to get a fraudulent judgment from Justice Ekwo against Omoyele Sowore of the AAC.

“He was rewarded with SAN (Senior Advocate of Nigeria) while he was litigating to take away AAC from Sowore. INEC has now become a ridiculous umpire in the conduct of elections. INEC chairman, commissioners have all become tools in the hands of Buhari and his party, All Progressives Congress,” an INEC staff member familiar with the case told SaharaReporters.

Meanwhile, Ozoani is currently enmeshed in another scandal after being exposed by some deregistered political parties for using fake court records in pursuing an appeal for INEC at the Supreme Court.

According to PREMIUM TIMES, the fake court records surfaced in the appeal filed by INEC at the Supreme Court to challenge the August 10, 2020 judgment of the Court of Appeal in Abuja, ordering the relisting of 23 political parties earlier deregistered by the electoral body.

The rules require an intending appellant to file a notice of appeal and compile the records of the lower court and have them transmitted to the higher court within three months of the delivery of the judgment to be challenged.

INEC had filed a notice of appeal against the August 10, 2020 judgment of the Court of Appeal, but the records it claimed to have compiled and transmitted to the Supreme Court to set the stage for the hearing of its case by the apex court, have been exposed by the respondents to be fraudulent.

From the court documents seen by the newspaper, INEC, which admitted that an impostor truly signed its transmitted records, is now scrambling to be granted an extension of time to compile and transmit fresh records from the Court of Appeal to the apex court.

Not pleased with the Appeal Court’s ruling, the electoral body filed a notice of appeal in the Supreme Court, challenging the verdict.

But curious about the records transmitted by INEC in pursuing the appeal, the law firm of the legal icon, Afe Babalola, which is defending one of the respondents, the Advanced Congress of Democrats (ACD), had written to the Court of Appeal authorities on December 10, 2020, alleging that an impostor of the court official signed the records purportedly transmitted by the electoral body.

The Court of Appeal, in a letter dated December 21, 2020, confirmed that Hassan Binta, who signed the record of appeal transmitted by INEC, was not known to the court.

“The Registrar in the person of Hassan Binta, who is said to have signed the record of Appeal and the Supplementary record is not a staff (member) of this court,” the Head, Litigation Department of the Court of Appeal, Sehriffat Adebayo, stated in the December 21, 2020 reply to the letter by Mr Babalola’s law firm.

Following the Court of Appeal’s confirmation, the law firm, through one of its lawyers, Funmilayo Longe, sent a letter dated January 14, 2021, to the Chief Registrar of the Supreme Court, expressing shock about the development and demanding an investigation.

A copy of the letter entitled ‘Request For Clarification On The Transmission of Records of Appeal’.

“In the light of the above facts, we hereby request that investigation be carried out regarding the transmission of records in this appeal.”

INEC has however admitted that a court official’s impostor signed its record of appeal but failed to offer any explanation about how it happened.

The electoral body is now scrambling to be allowed to compile a fresh record of appeal.

It filed an application before the Supreme Court on January 25, 2021, seeking leave and an extension of time to compile and transmit the fresh records.

The commission, in an affidavit filed in support of the application, stated that it sought to compile and transmit fresh record after it was only informed of the fraud in the previous records by Babalola’s law firm.