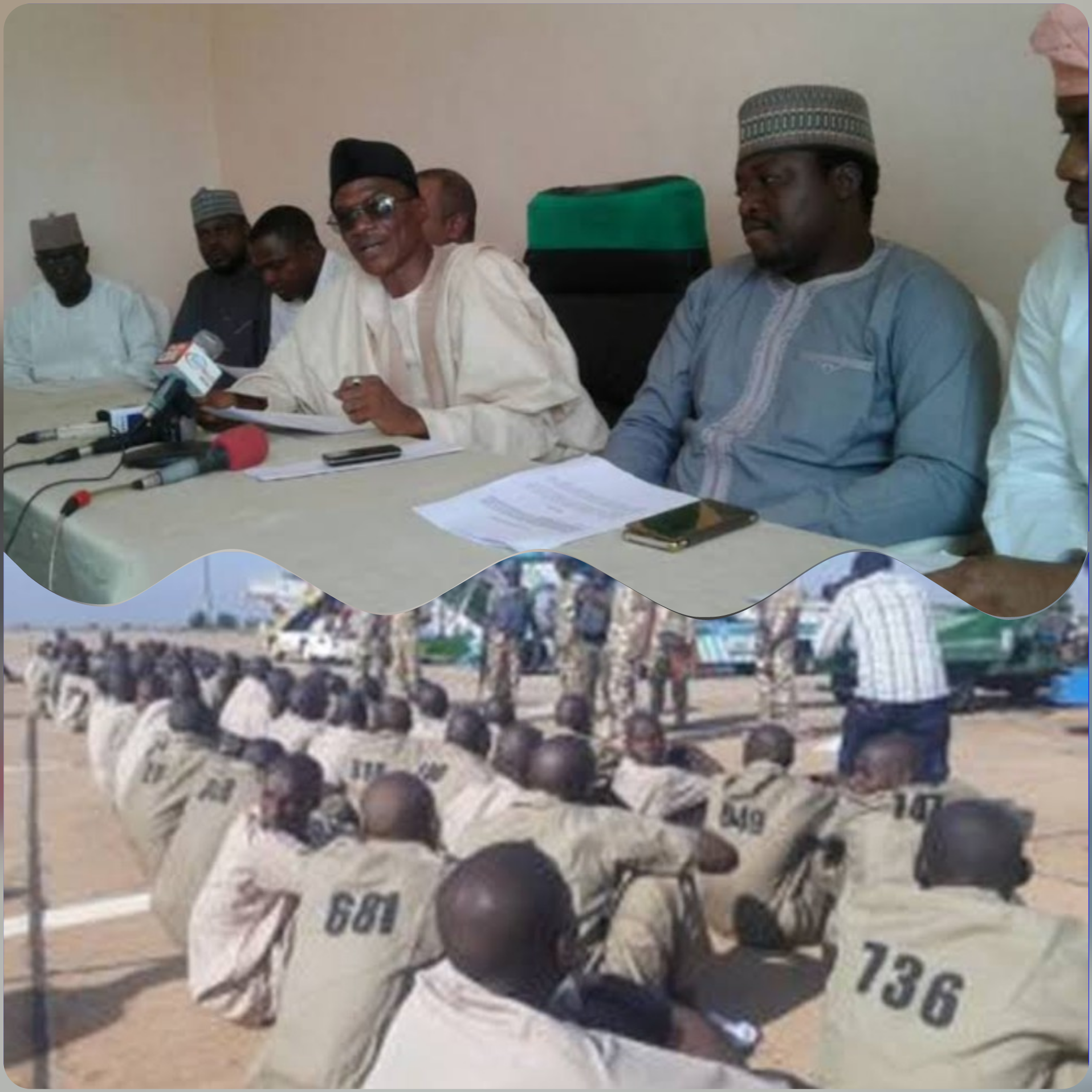 • Senate moves to create agency for insurgents’ welfare
• It’s impunity taken too far, says Afenifere
• Arewa youths want sponsor of bill investigated
• Why it is an invitation to war, by HURIWA

A fresh crisis looms in the country as stakeholders yesterday rejected a move by the Senate to establish an agency to make life comfortable for ‘repentant’ Boko Haram terrorists irrespective of their wanton destruction of lives and property.

Specifically, ignoring persistent public outcry against the release of the suspected insurgents, the Senate has begun a legislative process to grant amnesty to the terrorists.

This the lawmakers plan to achieve by passing a bill for an Act tagged “National Agency for Education, Rehabilitation, De-radicalisation and Integration of Repentant Insurgents in Nigeria 2020, SB. 340.”

The bill is being sponsored by the immediate past governor of Yobe State, Ibrahim Gaidam, who now represents Yobe East Senatorial District in the National Assembly.

It was learnt that proponents of this legislation believe that the Boko Haram suspects, who had inflicted unprecedented torture on and killed thousands of innocent citizens, particularly in the northern part of the country, should be made to enjoy what beneficiaries of the Presidential Amnesty for Niger Delta militants have been enjoying.

Accordingly, the bill, the first reading of which got automatic passage on the floor of the Senate yesterday, seeks to give immediate legal backing for repentant insurgents to be integrated into the society.

The main objectives are:
• to provide an avenue for rehabilitating, de-radicalizing, educating and reintegrating the defectors, repentant and detained members of the insurgent group, Boko Haram, to make them useful members of the society. It also aims at providing an avenue for reconciliation and promoting national security;

• to provide an-open-door and encouragement for other members of the group who are still engaged in the insurgency to abandon the group, especially in the face of the military pressure;

• to give the government an opportunity to derive insider-information about the insurgents for greater understanding of their group and its inner workings;

• to help disintegrate the violent and poisonous ideology that the group spreads as the programme will enable some convicted or suspected terrorists to express remorse over their actions, repent and recant their violent ideology and re-enter mainstream politics, religion and society.

Critics of the exercise pointed out that whereas victims of the Boko Haram attacks had remained substantially neglected in the Internally Displaced Persons (IDP) camps to the evils of rape, hunger, malnutrition and other socio-economic vices, the Federal Government has turned its attention to providing safe havens for those who maimed and killed.

Former Senate Majority Leader, Ali Ndume, whose senatorial district has been the most affected by the Boko Haram insurgents’ attacks, said last month that more work was required to be done for the victims.

“About 1.7 million people have been displaced in Borno alone. The value of the damage is about $9.6 billion in Borno alone. About 60,000 children are orphaned. Only God knows how many children are out of school, have no access to water, food and means of livelihood. The humanitarian crisis that is coming after the war may be more dangerous than the war itself. The insurgency is going into its 10th year. Some children haven’t been in school in the last 10 years and we know what that means,” he lamented.

The Defence Headquarters had, in the heat of criticisms against the release and rehabilitation of Boko Haram suspects, tried to justify the action.

The Acting Defence spokesman, Brig-Gen. Onyema Nwachukwu, told The Guardian last week that the initiative was only targeted at low-risk Boko Haram members, who were not captured during combat.

About 1,400 ‘repentant’ Boko Haram suspects, who were in detention, were recently released and resettled into the society by the military.

Nwachukwu explained: “In 2016, the Federal Government initiated Operation Safe Corridor (OSC) to de-radicalise repentant members of Boko Haram. It is not anything that is done haphazardly. The target audience are not those captured in combat. No!

“Those captured in combat are processed for prosecution, but the ones that have not been ideologically indoctrinated because they were conscripted, they were abducted, are the ones being rehabilitated. They call them low-risk combatants. Those ones do not buy into Boko Haram agenda; they were forced into it. These repentant members have been assisting the military by providing intelligence on Boko Haram’s activities.”

The Senate Committee on Business and Rules has been directed to schedule the bill for general debate after which it would be passed at second reading and third reading.

Both groups expressed shock over the proposal, saying whosoever had proposed such a bill to grant amnesty for criminals who killed, maimed, raped and destroyed innocent peoples lives and property, and threw the country into jeopardy must be thoroughly investigated and probably marked as enemies of the state.

An Afenifere leader, Pa Ayo Adebanjo, described the development as an insult to Nigeria and scandalous to the National Assembly. While he wondered what President Muhammadu Buhari’s administration was up to, Adebanjo asked: “How can anybody think of feeding criminals and enemies of the state. This is impunity taken too far.”

President of AYCF, Alhaji Yerima Shettima said: “The proposal is stupid and the sponsor of such a bill needs to be thoroughly investigated.

“If government cannot cater for the direct victims of the Boko Haram suspects or address a situation where the soldiers that are risking their lives to contain the insurgents are crying over poor welfare package and the Senate is debating how to grant amnesty to the suspects, it speaks a lot about the characters ruling us. Nigerians must be ready to interrogate the intention of the person that sponsored such a bill?”

Col. Tony Nyiam (rtd) wondered why the Boko Haram suspects would be the major concern of the senators “when the victims of their actions and deeds are still suffering and thousands are dead.”

He also wondered what the government was doing to help the embattled military officials that have been fighting the insurgents over the years.

Human Rights Writers Association of Nigeria (HURIWA) rejected the proposed bill and warned that the move to legislate outright pardon of armed terrorists under the guise of de-radicalisation programme could result in the civil war in the short, medium or long term.

In a statement issued yesterday in Abuja by the National Coordinator, Emmanuel Onwubiko, he said that the bill was unconstitutional and offended all relevant anti-terrorism laws of the federation.

“Let us form the HURIWA caution the section of the national legislators who are actively conniving with armed terrorists to introduce a satanic legislation that will overlook the mind-boggling crimes of genocides committed by terrorists and the killings of over 30,000 innocent Nigerians in the last ten years with the view to appease terrorists even when the victims of terrorism are scattered in different internally displaced camps in Nigeria and are external refugees in so many nearby countries.

“If this bill to legalise the freeing of arrested terror suspects under any guise succeeds, then the nation should be prepared for the consequences of their unconstitutional action because the hundreds of thousands of innocent victims of the terrorists attacks in the last decade will definitely not fold their hands whilst those who killed their loved ones are pardoned through roguish means by the passage of this criminally-minded bill that is meant to legalize mass murder.

“This bill before the senate is not only satanic and unconstitutional, but will paint the picture of a rogue nation because in all civilizations, those who declare war against innocent citizens and participate in genocide are rounded up and prosecuted and made to face the full weight of the law.

“History is replete with a plethora of trials of persons who have joined terror gangs and carried out mass killings. The plot by the National Assembly to, therefore, permit the wanton defecation of the constitution of Nigeria by forgiving mass murderers must never be allowed to succeed,” HURIWA stated.

The human rights group urged the government to engage in a law-based war by enforcing anti-terrorism laws, stressing that section 1A (4) of the Terrorism Prevention Act (TPA) (as amended) empowers “the law enforcement agencies” to “enforce all laws and regulations on counter-terrorism in Nigeria”.

It added that prior to the TPA, section 46 of the EFCC Act 2004 defines “terrorism” to mean a violation of the criminal code or the penal code and with likelihood of endangering life, integrity or freedom, or causing serious injury or death with the intent to force the person(s) or body or government to do or not to do certain things or disrupt and includes financing or aiding terrorism. The punishment for the crime by Section 15 of the EFCC Act is imprisonment for life.”

“Nations which have achieved stability and national security are those which have elevated law above political, religious, ethnic sentiments. The present Federal Government must be compelled to advocate national security on the basis of respect of not only individual rights but also the rule of law, but definitely not the appeasement of terrorists.”

A source close to one of the commissions overseeing the affairs of victims of insurgency in the north disclosed to The Guardian that the proposal was not new as “the rehabilitation and reintegration process have been on over a while.”

He also disclosed that many of the northern elite, especially those whose families, friends and associates had fallen victims of Boko Haram insurgency, were shocked by the proposed amnesty.

“There is this apprehension over government’s haste to legalise the amnesty proposal to common Boko Haram criminals who have killed, raped and destroyed many lives and property,” noted.

The source said that Nigerians should further interrogate if the ultimate agenda is not to finally integrate the Boko Haram suspects into the military. “Nigeria is in a terrible situation,” he said.

Meanwhile, the General Secretary of the Pan Niger Delta Forum (PANDEF), Dr. Alfred Mulade, said (via phone): “It is a keg of gun powder waiting to explode. Few days ago the military said they have de-radicalised over 608 Boko Haram repentants and the military have also said the Boko Haram has been decimated. Where do we still have this whole large number that they are planning to create special commission and use public funds for?

“We were told that Boko Haram had been technically defeated, where do we still have this large number that you want commit public funds to de-radicalise?

“It is another means by which they might infiltrate into the civil society and cause more havoc. Government should discourage that kind of arrangement and stop that bill from passing through.”