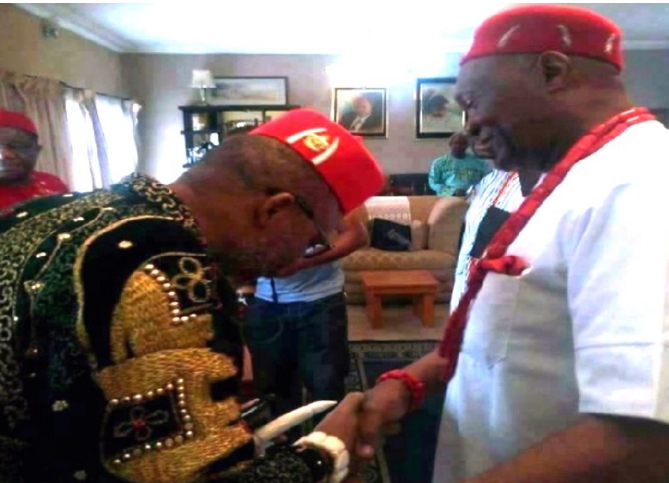 The President General of Ohanaeze Ndigbo, Chief Nnia Nwodo has refuted the claim that he colluded with South-East governors and order the Nigerian military to invade the home of Nnamdi Kanu, the leader of the Indigenous People of Biafra (IPOB).

Nnamdi Kanu had alleged that the Ohanaeze president and South-East governors conspired with the Nigerian military to assassinate him over the agitation for Biafra.

Responding through a letter sighted by SaharaNews, on Friday, Nwodo said that he never participated in any meeting where Operation Python Dance and the invasion of Kanu’s home was recommended or ordered.

He said: “The IPOB leader first of all accuses me of being an accomplice to the invasion of his homestead in Umuahia by the Nigerian Army in Operation Python Dance.

ALSO READ:  BREAKING: Africa Will Not Be Testing Ground For COVID-19 Vaccine — WHO Insists

“He accuses me of being against the realization of Biafra and a saboteur to the Igbo cause.

“Secondly, I never participated in any meeting where operation python dance was ever recommended or ordered.

“Truth is that when the second operation python dance was ordered, I wrote against it and advised against it in the media. I saw no need for it I condemned the mayhem that followed it. I wrote to the GOC 82 Division N.A on the violation of the UN rules of engagement by his troops.

“I listened to the brief of the Abia State Government on the clashes between the Nigerian Police and Nnamdi Kanu on the establishment of the Biafra Security Service without legislative approval or knowledge of the Nigerian Police. I called for caution.

“I confronted the Attorney General of the Federation on his move to obtain an interlocutory order to enable him classify IPOB as a terrorist organization. When the Federal Government finally proscribed IPOB, I criticized it.

“I maintained the same view in my public lectures at Nnamdi Azikiwe University, Awka, UNN, Odumegwu Ojukwu University, Anambra State and many other places within and outside Nigeria.

“I challenge Nnamdi to give me one single evidence of my involvement in conspiring Operation Python Dance.”

JUST IN: When A Lost Touch With Realities, He Talks Like Nnia Nwodo – Prof Ohagi Replies Ohanaeze