News ASUU hints at embarking on another strike 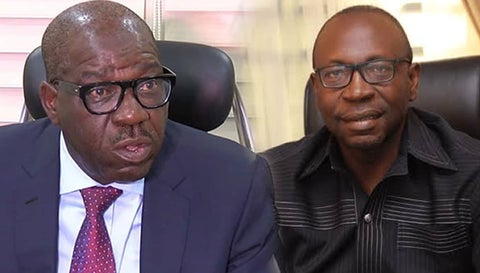 The gubernatorial candidate of the All Progressives Congress (APC) in the just-concluded Edo election, Pastor Osagie Ize-Iyamu has declared that he is ready to work with his victorious opponent, Governor Godwin Obaseki.

Ize-Iyamu disclosed this during a press briefing on Wednesday.

He also had a closed-door meeting with his party’s caretaker chairman and governor of Yobe State, Mallam Buni and Governor Yahaya Bello of Kogi State in Abuja.

Ize-Iyamu at the press conference said: “We are going to talk to everybody, we will bring everybody back. I want to salute my brother, the governor of Edo State, Mr Godwin Obaseki. I am appealing to him to return to the party. In every family, there must be a disagreement.”

Let it not be said that it was this disagreement that pushed him out of the party. I made the mistake before and I have come to realise that it was a grievious error and I would not want him as a senior brother to make the same,” he added.

Furthermore, Ize-Iyamu asserted he is appealing to him to come back to the party where he truly belongs saying

“In APC, he’s recognised as a leader but the new party he is, it will be difficult for them to accept him(Obaseki) as a leader.

“So I am ready to work with him and all well-meaning Edo people. We believe that it is time we bring peace to our state, ” he concluded.

Ondo Election: There Is Gang Up Against Us – APC Spokesman.