BUHARI OR JUBRIL : What did the senate president mean when… 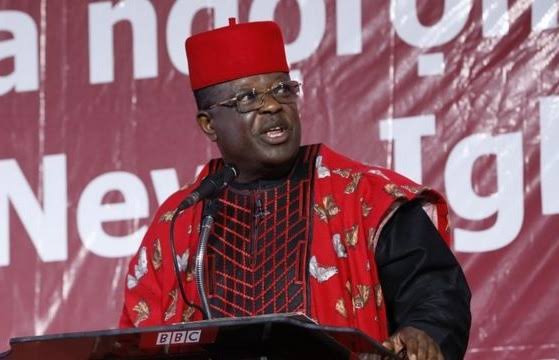 Ebonyi State Governor, David Umahi, on Monday, condemned Sunday killings, burning of houses, vehicles and other valuable property at Akaeze, in the Ivo Local Government Area of the state.

He also vehemently frown at the alleged torture to death of one Mr Nnaogo Anyim by suspected operatives of the Ebubeagu Security Network in the area and vowed to remove them from the outfit.

The governor also maintained that they would be prosecuted, saying life was very sacred that nobody had the right to take it.

Umahi stated this in a statement signed by his Special Assistant on Media and Publicity,Francis Nwaze, on Monday.

According to the statement, “The Ebonyi State Governor, His Excellency, David Nweze Umahi, has condemned the recent hostility in Akaeze, Ivo Local Government Area, which has led to loss of lives.

“Governor Umahi condemned the incident when he paid an on-the-spot visit to Akaeze to assess the level of carnage as a result of the violence, on Monday.

“Governor Umahi frowned at the needless burning of the Akaeze Police Station and property of the Chairman of Ivo Local Government Area as well as a Development Centre Coordinator, by the irate youths.

“He directed the prompt arrest of those involved in the dastardly act captured in the video which has been circulating on the social media where axe-wielding persons were seen using the weapon on a human being to underscore the sanctity of human lives.”

The statement further quoted Umahi as saying, “I feel so sad over the couple of incidents that happened in this place. In the first place, I condemn the viral video that was making the rounds where somebody was using an axe on a fellow human being.

“There is no reason in this matter that should warrant anybody to take law into their hands, at the end of time we are going to be accountable to God.

“It is important to note that Ebubeagu is a security outfit backed by law and it will not be disbanded but any Ebubeagu member that violates the law will go in for it.