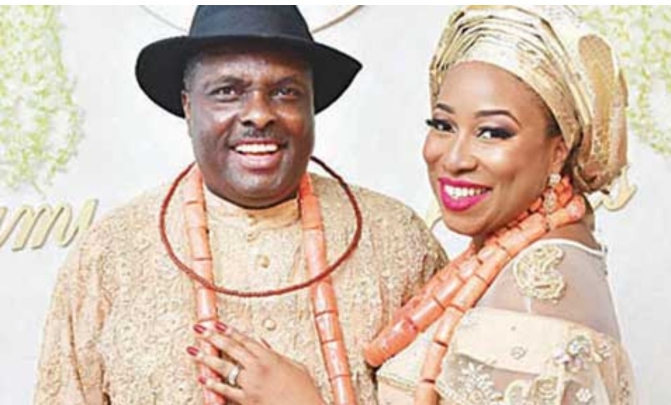 SaharaNews reports that her unhappiness is not unconnected to the fact of having her child in God’s own country crumbling before her very eyes, despite the political powers and financial war chest of her husband.

According to what a reliable source told SaharaNews, Senami Sosu whose married to the political big boy was the talk of the town wedding in 2017 has safely put to bed.

SaharaNews gathers that Sosu, a graduate of UNILAG flew in the 8th month of her pregnancy to have her child to the USA but on arrival was refused entry into the country.

SaharaNews further learnt that with no reason given to her, Sosu was turned back at the Point of Entry (POE), a situation she could not save despite various calls placed to the US embassy and diplomatic figures from Nigeria.

The fair skin goddess of fashion who mesmerises Ibori’s head was all tears as next available flight was booked for her. She headed to London, where she had her baby who will not be a UK citizen, as the laws do not acknowledge citizenship by birth like US, Canada or Brazil.

ALSO READ:  Despite The Outcry Of Many Suffering Nigerians, The 9th Senate Passes Bill To Increase Value-Added Tax

We gathered that efforts were made by the powers that be to get her back to the US before her expected date of delivery but one of our sources revealed that it was futile as the US were making plans to ban her from the US, hence the initial denial at POE.

With this turn back, she is the first public casualty of the yet to be established law of the Trump administration, seeking to abolish citizenship by birth in the US.