JUST IN: Killing and Imprisonment of Biafrans Can Never…

IGBO PRESIDENCY: We Have Concluded Plans To Make It A Reality – Ohanaeze 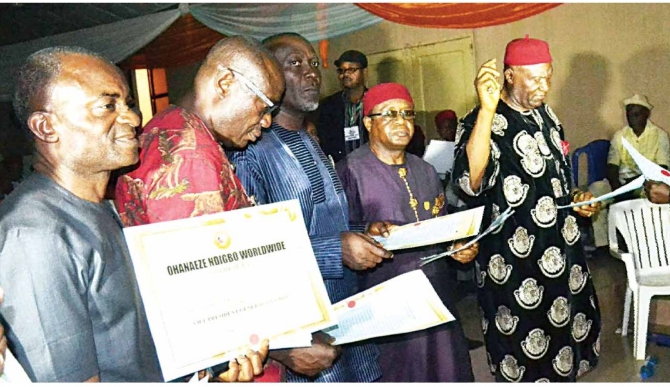 SAHARANEWS – Ohanaeze Ndigbo Youth Council Worldwide has said that ‘a Nigeria President of Igbo stock will largely favour the North with huge dividends of democracy.’

Ohanaeze youths made this known on Saturday in a signed by Mazi Okechukwu Isiguzor The statement said “Ohanaeze Ndigbo Youth Council Worldwide has taken the lead in building bridges across the six geo-political zones, through aggressive persuasion on some aggrieved northern groups and leaders, who felt marginalised in the President Buhari regime or schemed out of relevance and importantly have viewed Southwest alliance with the North as a farce.

“We have concluded arrangement to play hosts first class traditional rulers, opinion leaders, prominent northern groups and Arewa youth leaders to re-align and build confidence ahead of 2023 Presidential election without any political affiliations or party.

“North has been the traditional partner in progress since 1960s with the old Eastern Region, until there was suspicion brewing between the years created by artificial barriers which this move and series of consultations will automatically restore.

“Hopefully will restore the North and Old Eastern Region alliances, then the insecurity in some quarters will be flush into the dustbin of history.

“Old Eastern Region alliance with the North through proper understanding and cooperation, will produce one of the present Southeast Governors and one present Northern Governor, or former Vice President or former Governor or Senator, depending on the choice of the North, will pair ahead of 2023.

ALSO READ:  "No IPOB Member Was Killed Under My Watch As A Governor, Am Certain They Will Not Attack Me Abroad" - Chris Ngige

Woman killed by stray bullet during Police, kidnappers fracas in Lagos “We are extending hands of friendship with the Coalition of Northern Groups and Arewa Youth leaders, to build a united front and alliance that will hold the two regions together as partnership, as we had in 1960s.

“History will always repeat itself, as traditional partners in progress, a Nigeria President of Igbo stock will largely favour the North with huge dividends of democracy.”

XENOPHOBIA: South Africa Reacts To Protests And Moves Against Its Businesses In Nigeria