Engineer arrested on charges of attempting to sell US… 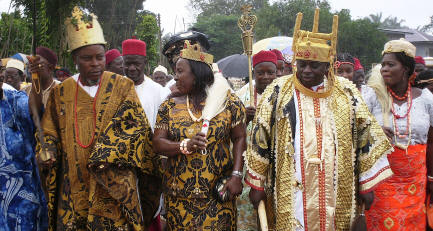 The scheduled Nigeria 2019 general election is just few weeks away and many evil antecedents are taking their roots, particularly across Biafraland. It is well on record that the State Governors within the Igbo extraction of Biafra particularly, true to their evil machinations, are dishing out instructions to the traditional institutions against taking sides with the planned election boycott as vigorously being campaigned by the Indigenous People of Biafra (IPOB).

According to confirmed reports obtained by Family Writers Press correspondents from across Biafraland, the governors of the so-called Southeast region, have unanimously threatened to depose any traditional ruler whose subjects fail to fully participate in the forthcoming general election of Nigeria. Recall that the leadership of the Indigenous People of Biafra (IPOB) worldwide, ably piloted by Mazi Nnamdi Kanu has in no unmistakable terms, declared a total boycott of the scheduled Nigeria general elections by her members across Biafraland. This is in tandem with the mandate that there will be no election within Biafra territory henceforth, unless the Nigerian government agrees to a date of peaceful referendum for the people of Biafra.

Presently, the State Governors are prepared to dethrone any traditional ruler who pitches his domain against the directives of his state government, in sympathy with his subjects. With this development, it is obviously clear that the Nigerian government through the instrumentality of these cynical political prodigal sons of Biafraland, are on a war path with the Biafran people. The information further establishes the fact that the five Southeast governors comprising of Willie Obiano of Anambra, Rochas Okorocha of Imo, Okezie Ikpeazu of Abia, Ifeanyi Ugwuanyi of Enugu and Dave Umahi of Ebonyi, have given traditional rulers in their respective States, huge sums of money for distribution amongst political stalwarts in their domains to woo voters during the upcoming general election. Failure to fully mobilize their villages, communities and towns for massive participation of their subjects, will lead to their dethronement.

ALSO READ:  EXPOSED:Buhari’s Minister Asked Me To Delay The Distribution Of COVID-19 Palliatives--Tambuwal(Video)

It is therefore suggestively necessary that the leadership of the Indigenous People of Biafra (IPOB) globally, initiate sending strong worded official letters to these traditional rulers, warning them to remain mindful of their traditional responsibilities and stay clinically clear from all political activities. The general election of 2019 will definitely present itself, a serious battleground between light and darkness. IPOB stands strongly unshaken on the total boycott of her intimidating membership across Biafraland and there is absolutely no prevarication about this.

There must be water tight surveillance around the activities of these traditional rulers within Biafraland, ranging from the Obi of Onitsha, Asagba of Asaba, Enyi of Aba, Amayanabo of Opobo, Obong of Calabar, Och’Idoma of Otukpo, Atta-Igala of Idah, amongst all others. Biafrans must be free from being compelled against their will and intent pertaining the general election skewed against their interest by these traditional custodians. Any traditional ruler who sees his throne more valuable than the overriding freedom of his people from the contrapted entity called Nigeria, will definitely have eternal regrets to contend with at the fullness of time.