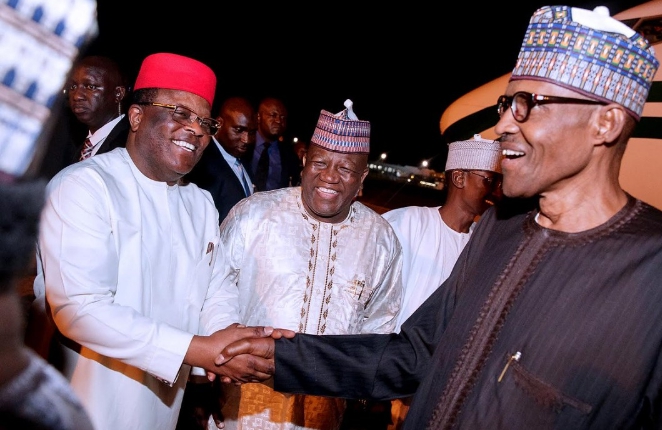 SAHARANEWS – Governor of Ebonyi State, David Umahi, on Thursday, said he would sack any of his aides who insults President Muhammadu Buhari.

Umahi was elected on the platform of the opposition Peoples Democratic Party.

Umahi also warned that any of his appointees who insults any governor or downplays their achievements will have his or her appointment terminated.

Governor Umahi said this in a statement signed by his Special Assistant on New Media, Mr. Francis Nwaze, and made available to newsmen in Abakaliki.

The governor’s aide quoted his principal as saying that anybody who wishes to “throw unnecessary stone against any of the above mentioned leaders should be ready to leave the administration.

Nwaze, in the statement, added “The Ebonyi State Governor, David Nweze Umahi, has prohibited any of his political appointees from castigating or abusing the Nigerian President, Muhammadu Buhari.

“Doing such to any government or any governor in this country has no value to add to his administration.”

Continuing, the statement reads, “The Governor has advised that anyone who wishes to throw unnecessary stone against any of the above mentioned leaders, should, in his or her own best interest, get ready to leave his government as such will attract immediate sacking.

“Any posting, henceforth, against the President, any governor or government from any of his appointees will attract immediate termination of appointment by him.

“If you want to castigate the President, his government or any governor, you must leave Governor Umahi’s government first.

“How does such castigation help the governor’s government?”