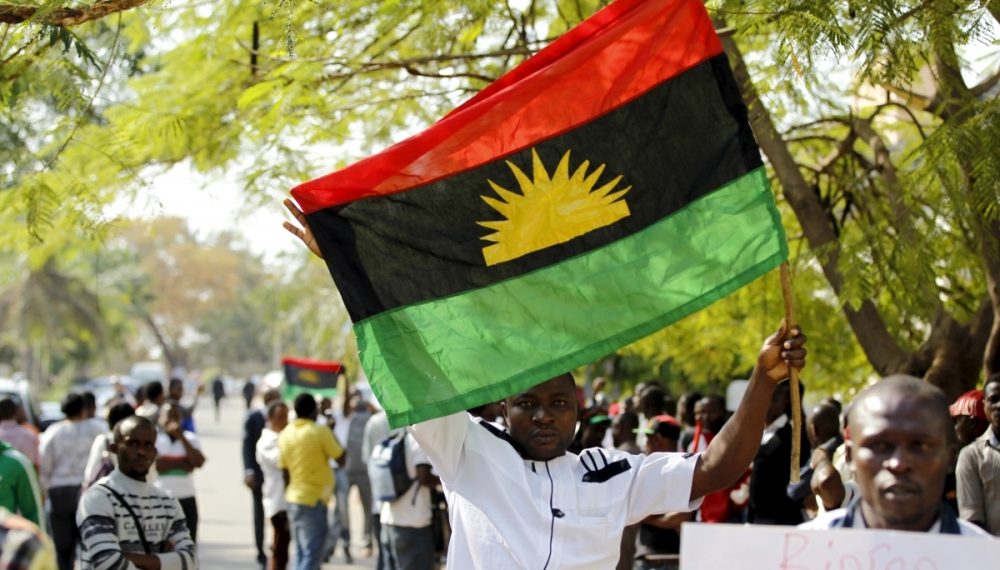 The Indigenous People of Biafra has accused the Nigerian government of planning to eliminate Biafran agitators in the country.

IPOB said the lives of its members are in danger and that the Department of State Services and other security agencies are monitoring their movements to kill or detain them.

This was contained in a statement made available to SaharaReporters on Monday by its media and publicity secretary, Emma Powerful.

In the press release titled, ‘Our Members’ Lives In Danger At Home – IPOB Seeks Foreign Protection,’ Powerful seeks the help of European countries to intervene and save IPOB members.

“We the Indigenous People of Biafra, IPOB, under the command of our great leader, Mazi Nnamdi Kanu, wish to put the whole world on notice that the lives of our members are in grave danger in Nigeria.

“Our members have been marked for elimination, and are being hunted by the Nigerian security agents.

“Some of our members who are lucky enough to escape to other countries escape untimely death while others who are not are being trailed for arrest and torture. Even those who fled the country are passing through trauma and emotional stress as they are being prevented from visiting home to attend the burial of their beloved ones.”

Speaking about the extent to which the DSS had gone to victimise its members, Powerful narrated the ordeal of an IPOB member, Obiageli Mboma, who allegedly escaped from the Nigerian Government by fleeing the country, but unable to attend her mother’s burial.

“Till today, operatives of the Department of State Services (DSS) and other security agencies in Nigeria are still trailing IPOB Media Supervisor in Rivers State, Madam Obiageli Vivian Mboma (aka Oby Mboma), who has fled Nigeria since 2016.

“This Biafran activist could not attend her mother’s burial which was held recently for fear of arrest by the Nigeria security agents. Madam Oby’s fate is common among thousands of other Biafran agitators who have today been made fugitives in their ancestral lands because the wicked security agencies in Nigeria have placed them on their wanted list.

“We commend European countries and other nations which provide refuge to many IPOB members and other Biafran agitators being hunted for elimination in Nigeria. The God of Heavens will not leave them unrewarded for this humanitarian gesture. When Biafra is fully restored, we shall certainly reciprocate this goodwill!”

IPOB called on advanced nations to lend support to its members by offering safe havens to them. It also berated the Nigerian government for hunting its members whereas it has not defeated terror groups inflicting pains on Nigerians.

“We, therefore, appeal to more countries of the world to please come to our rescue. Our members are facing serious persecution in Nigeria. Security agents keep trailing and hunting them.

“Some of them are languishing in various detention facilities across the country without trial. Instead of fighting terrorists, bandits, killer herdsmen, Boko Haram and ISWAP that are on the verge of taking over Nigeria, the Nigerian government is only busy hunting down peaceful Biafran agitators.

“Our members are in serious danger in Nigeria. We appeal for global assistance so that Nigerian government will not succeed in its evil agenda to decimate Biafra activists. We are peaceful people seeking the restoration of our beloved Biafran Republic.

“Our only crime to the Nigeria State is that we demand self-determination, which is our fundamental right.”