CALL OFF ELECTION BOYCOTT: We Can’t Sign Any Document With…

JUST IN: DSS Finally Confirm The Arrest Of Sowore, Gives… 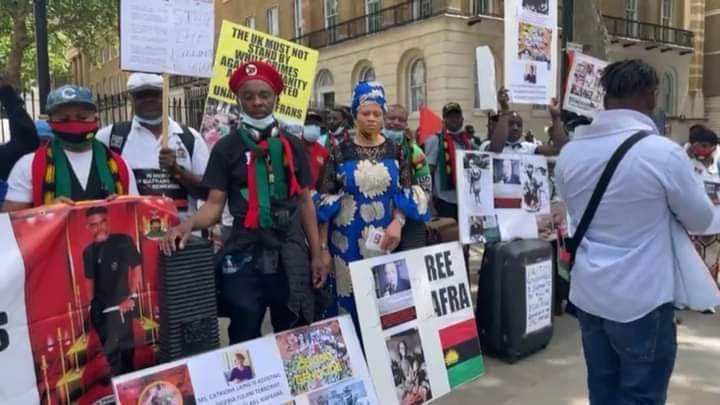 Members of the Indigenous People of Biafra (IPOB) demonstrated in Downing Street, London, on Thursday.

The group demanding a referendum for the eastern region of Nigeria to secede from the country said its protest was for the British government to compel the Nigerian government to stop its attacks and killings of civilians in the south-eastern region.

“We are also calling for a referendum on Biafra,” said the protesters in Downing Street.

One of the protesters told Gazette Africa that they blames Britain for the ongoing killings in southern Nigeria and the delay in holding a referendum for Biafra because “it was Britain that brought together people who didn’t want to stay together, and colonized them. We are tired and no longer want to be part of Nigeria. They should make ensure that we are freed from the union called Nigeria ”.

Attacks and killings by government forces in areas inhabited by Igbo tribes in Nigeria have left at least 400 civilians dead since October 2020.

In Imo State and other parts of the eastern region; there are ongoing military raids, indiscriminate arrests, killing of civilians and destruction of property by police and soldiers who claim to be looking for the assailants who attacked, burned down police facilities and killed some policemen and soldiers.

Meanwhile, renewed crackdown on IPOB members has worsened since Nigerian President Muhammadu Buhari pledged to decisively punish separatists calling for a referendum in the country.

At least 240 IPOB members have died in the new crackdown that began in September 2020.