IPOB, Set To Deliver Strong Messages To The World Via Historical One Million Man March In Washington DC 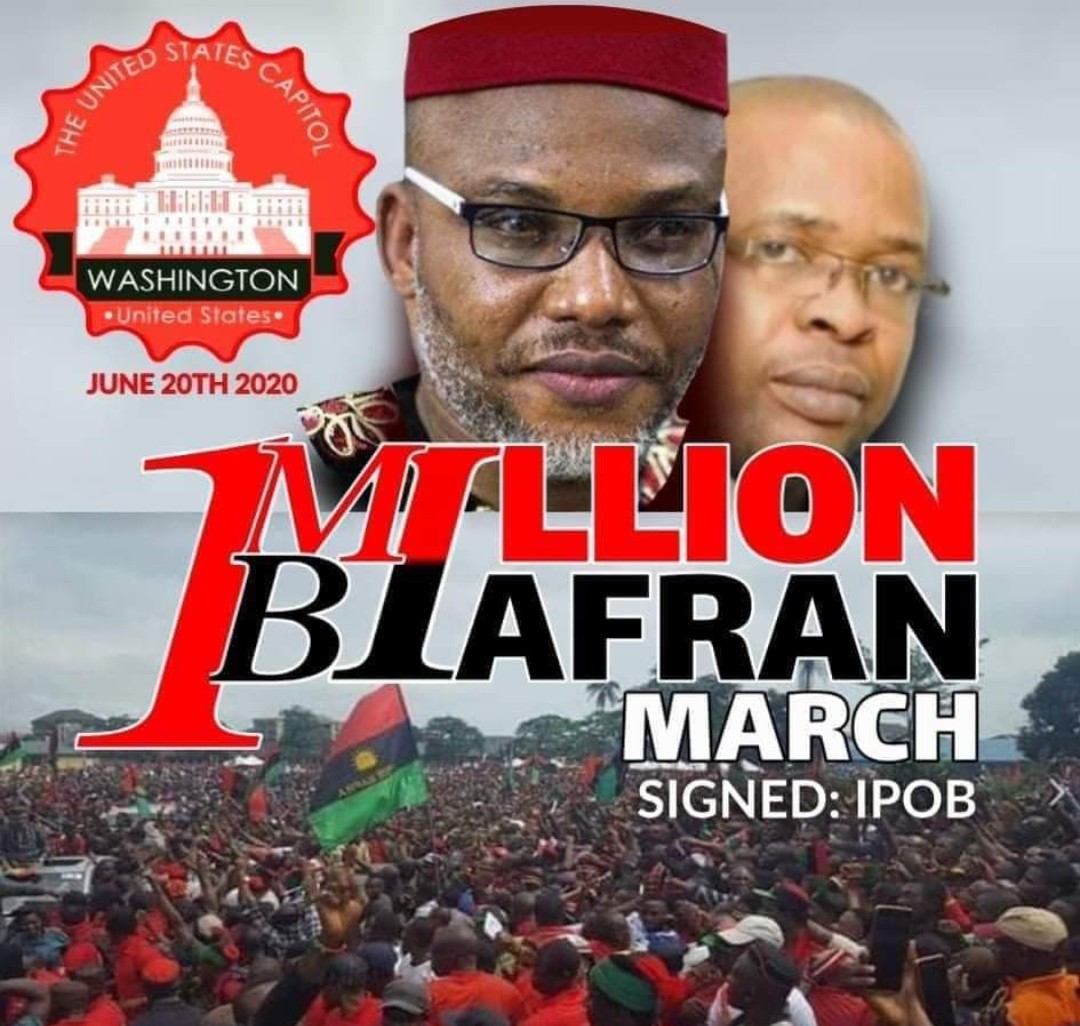 SAHARANEWS – Clock is ticking, days, weeks and months are fastly rolling by, drawing closer, Saturday 20th June, 2020. This is the marked date the Indigenous People of Biafra (IPOB) globally, ably led by Mazi Nnamdi Okwu-Kanu, will be staging an unprecedented “One Million Man March” on the streets of Washington DC, the hallowed capital city of the United States of America. President Donald John Trump, a man that totally abhors all forms of political oppression and subjugation, is most expectedly billed to address Biafrans on that day. These are people who have over the years, bore the brunt of injustices perpetrated by the occupational government of Nigeria.

President Trump in his pragmatism has courageously demonstrated his outright rejection of every form of inhumanity and injustice when he recognized the ancient city of Jerusalem as the eternal capital city of the Jewish State of Israel. His expected next step will most likely be to recognize under global view, the sovereignty of the ancient indigenous nation of Biafra, in the West African sub-region. This is a nation the British colonial overlords stripped off her sovereignty in the year 1914 and lumped together in a grossly unworkable union called Nigeria.

Now that the Indigenous People of Biafra (IPOB), are taking their global agitation for political independence as a nation to Washington DC, courtesy of the vibrant diplomatic offensiveness being launched by Mazi Nnamdi Kanu to totally/completely curry US support, Biafrans globally will be expecting nothing short of practically seeing President Trump or his representative coming up to address them on that historic day of Saturday 20th June, 2020. This should feature a categorical statement regarding the plight and agitation of the Biafran people. There should be no hiccup this time around that will prevent the US President from openly addressing the people right in his domain.

20th of June 2020, is realistically going to be a date of history with humanity as Biafrans globally, will converge in their numbers as a people, to emphatically shake the city of Washington DC, as a way of putting the world yet again, on notice over their irrevocable demand for the sovereignty of their God-given homeland Biafra. It will interest President Donald Trump to know that it was what the Adjutant-General, George Washington and his team clearly agitated for in the 1770s from the British Empire with recorded successes, that gave rise to the United States of America, becoming the incontestable envy of the entire universe, today.

It is absolutely the same thing that Mazi Nnamdi Kanu and IPOB under his supreme command, are equally agitating for, against the Nigerian government with the full expectation of making Biafra a Judeo-Christian nation after the similitude of USA within the global community. President Donald Trump will definitely make history and write his name on gold, come Saturday, 20th day of June 2020, if he courageously steps forward to address the Biafran people in Washington DC, categorically making very definitive statements regarding their agitation for political independence.

ALSO READ:  Junaid, For How Long Will You And Your Caliphate Be Drunk With Igbo Blood? - Fani-Kayode