IPOB, The Only Mass Movement Capable Of Organizing A Successful Revolution – QED 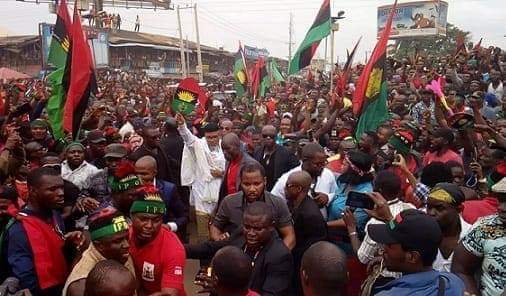 According to the Holy Bible, “When the righteous are in authority, the people rejoice; but when the wicked rules, the people mourn.”

The general public respect honesty, integrity, sincerity and humility. A politicians must say what they mean and mean what they say. The problem is that most politicians are liars and they say one thing to get elected and do another thing after they are elected. Where are the honest politicians? Where are the politicians who place the best interests of the nation first before other interests and special interests and personal interest? Crooked politicians are a disgrace to any nation. A lying, thieving corrupt politician is not “a fit and proper person to hold public office.” ― Errol Anthony Smythe. But in this part of the world, we tear ourselves apart to keep them. But one would question why our thinking has gone so low to still support this men of high immoral behaviors, or is it that these men have ripped off our senses. One would have been forgiven for mistaking the Indigenous People of Biafra (IPOB’s) civil disobedience against Senator Ike Ekweremadu, to the ranting of a Nigerian teenager approaching his puberty or aggrieved youth, or even a political quagmire, but to see some people who claim they are scholars supporting these politicians and condemning the action of IPOB is really worrisome.

To think that professors like Professor Charles Soludo, right thinking human beings and other well meaning Nigerians, would condescend so low in thought and civility to condemn the action of IPOB in Nuremberg, Germany, reminds Nigerians of the enormous work ahead if we will ever live in an environment of decent men and women. We are not just at war with the Nigerian Army who would prefer a bandit and murderer freed and their fellow force members killed, Boko Haram and Fulani herdsmen menace; we are at war against deteriorating reasoning. “It looks like retarded specie of homo sapiens has evolved in the bantu sub-Saharan Africa”. Nigeria will never see any revolution, except it is organized from outside the country and unless IPOB, spearheaded by Mazi Nnamdi Kanu is the organizer of the revolution.

ALSO READ:  BIAFRA: Nnamdi Kanu Should Be Arrested If He Dare Steps Into Nigeria’ – Junaid Mohammed

According to Reverend Father Felix, “Africa political growth has been stalled on three factors.” First, African revolutions have always been hijacked by the elites. Ninety five percent of the wealth of Africa is controlled by the political class and their cronies who do not constitute more than two percent of the entire population. Whenever the masses come close to a revolution, the elites dissolve into the crowd, forming groups and fake sympathy with the agitating masses. They hijack their common pain, use it to oust a regime and wrestle power back. Months after inauguration of the new regime, they begin reconciliations, sending the poor masses back home. We have seen this in Egypt, Tunisia and Libya. Gambia is the newest baby. In Nigeria, the People’s Democratic Party (PDP), fantastically bequeathed to us, a corrupt system. At the peak of it, they got factionalized and formed All Progressives Congress (APC) and riding on public disenchantment against corruption, they hijacked the power back. Today, we have the worst government since amalgamation of Nigeria in 1914.

Secondly, African revolutions fail because African States get leaders they deserve. African masses are always weak to resist immediate gratifications for long term political freedom. Greed and hunger have forced masses to settle for anything. Across the 36 state capitals in Nigeria, the oppression is successful to the level that even our brothers and sisters are used to destroy our collective good. Even those not benefiting are just comfortable that their kinsmen are in-charge. Take a look at our haggard boys and girls who praise-sing our government. Their minds can be as damaged as some of their grammars. Our leaders know this, that is why they recruit willing hands to frustrate common good.

ALSO READ:  ASUU Gives One Condition FG Must Meet To Call Off Strike.

Lastly, Africa is nurtured into divisiveness. Nigerians can identify their problems but they seek solutions with divisive lens. We cry for neglect of infrastructures in the South-East but the leaders of the region convert our meager allocations into gifts and send them back to the North to curry favour. When policy analysts advocate for prudent spending, their first attack comes from the poorest of the poor”.

It is time for Sowore to have a rethink, strategise, be more prepared and put his house in other before telling Nigerians about ‘RevolutionNow’. From the look of things, he now knows he is on his own. Slaves can be saved only if they knew they are a slaves.

BREAKING: “I Was Terrified When I Saw The Video Of IPOB Members At Nigerian Embassy In Japan” – Abike Dabiri