BREAKING: ISIS Names New Leader Shortly After The Death Of… 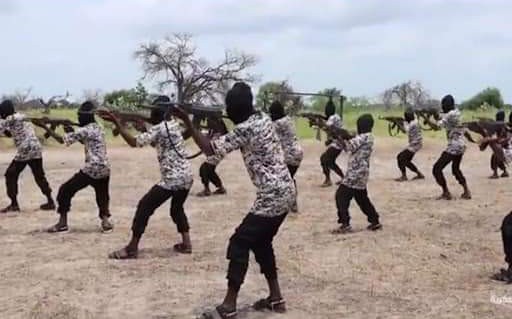 The Islamic State franchise in Northeast Nigeria and Lake Chad, ISWAP, has posted a video online showing the regimented indoctrination and training of children, prepared by the group to be the next generation of fighters.

In the 27 minutes long video shared on Tuesday, Jan. 18, children of different age groups wearing balaclavas were shown passing through a series of activities crafted for indoctrination and combat training.

Titled “Empowerment Generation,” the video appears to focus on the terror group’s programme to model its upcoming set of fighters. This is unlike the theme of other videos such as the “Makers of Epic Battles” released in 2021, which showed the group’s attacks as well as light and heavy weapons arsenal.

In the recent video, young boys guided by instructors were shown engaging in a regimented style of activities including waking up before dawn, weapon handling training, physical fitness practice, as well as religious and indoctrination classes held in the classroom.

The clip had sections where children were exposed to other Islamic State materials. Multiple instructors also appeared, speaking on the terror group’s training programme to model the young members into fighters and the nature of instructions.

The children are seen being guided through martial arts and negotiating obstacle courses, in addition to weapon handling and firing positions using Ak pattern rifles. The young boys also conducted a mock assault using an abandoned building with two captives.

The children are additionally shown executing three people, including a man in military fatigue and another man who identified himself as a soldier of the Nigerian Army abducted in Kanamma in April 2021.

Kanamma is a border community and the headquarters of Yunusari Local Government Area (LGA) in Yobe State.

The footage which included drone shots showed an environment consisting of grass vegetation, shrubs and wetland type terrain, indicating that the clip or parts of it was taken somewhere along the Komadougou-Yobe river or near Lake Chad.

Children have often appeared in videos of terror groups in the region. They have also been used in attacks. In 2021, ISWAP rival group, Boko Haram, released a video showing child soldiers undergoing religious and combat training in a camp.

Amnesty International in a 2020 report highlighted how children have been among those most impacted by the insurgency, including through repeated attacks on schools, widespread abductions, recruitment and use of child soldiers, and forced marriage of girls.