JUST IN: Tinubu Denies Describing Buhari As A Religious…

BREAKING: Senate Presidency: “I Have 56 Senators Backing Me”… 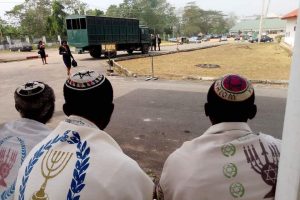 No fewer than 51 members of jewsish worshipers was arrested in Umuahia, Abia State, by the Nigerian military operatives during their allegiance rally for Israel. Abia State court gave order to remand them in Abia Maximum Prison after areigning them in court.

They were charged with treasonable felony for belonging to a secessonist group called Indigenous People Of Biafra (IPOB). Although many international organizations have severally ranked IPOB one of the most peaceful freedom fighters world wide.

Today, 20th of December 2018, Members and leaders of Biafra Jewish worshipers stormed court in Umuahia Abia State, for the further court hearing of her members who were detained illegally in the prison.

This Government Has Not Made Any Significant Progress – Shehu Sani