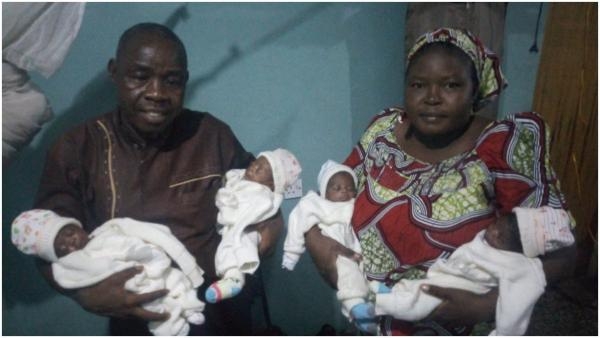 SAHARANEWS – After 15 years as a couple without a child, a retired Federal Medical Laboratory Scientist, Mr. Luka Bot Balewa and his wife, Mrs. Nyarum now have a cause to smile.

The couple wedded on December 4, 2004, Mr. and Mrs. Balewa never knew they would become parents until last Tuesday when they had their first kids – a set of quadruplets.

This was after enduring mockery and pain for lack of children since marriage.

“I felt the pain of childlessness every month,” she said in an interview.

“Every month, I hoped for a new story,” she narrated her ordeal to SaharaNews correspondent in Jos, the Plateau State capital.

According to her, childlessness is the worst form of torture a woman would ever have.

“It deals with you social, mentally and spiritually.”

She, however, kept her hopes high, resisting negative criticisms and advice until nine months ago when she tested positive for pregnancy.

“I didn’t even believe it, but when I went for scanning six months later and was told it was quadruplets, I was dumbfounded,” she narrated.

Her husband, Mr. Balewa didn’t just share in the disbelieve but kept it to himself until the kids were born.

ALSO READ:  BREAKING: Mysterious Deaths In Kano Rises To 640 In Less Than One Week

“I hate disappointments so I told God if this blessing wasn’t mine in the first place, don’t raise my hopes and later take it away,” he said.

During his period of childlessness, Mr. Balewa equally faced stigma and negative criticisms but remained strong in prayers.

“I got married late and people said I was initially impotent that’s why,” he said.

After series of medical examinations, the retired staff of Abubakar Tafawa Balewa University, Bauchi was sure that it was God’s decision to not give him children.

“Nothing was found to be wrong with me or my wife, so we kept praying and trusting God,” said Mr. Balewa.

Balewa, now a Pastor was, however, under-confident in preaching about God’s supreme power due to his inability to father a child.

“I asked God at various times; how do I preach that all things are possible with you while still without a child?”

The coming of the kids is, therefore, a “surprising prove of God’s supreme power,” said Bot.

The couple is expected to be discharged on Monday after the third routine examination of the children.