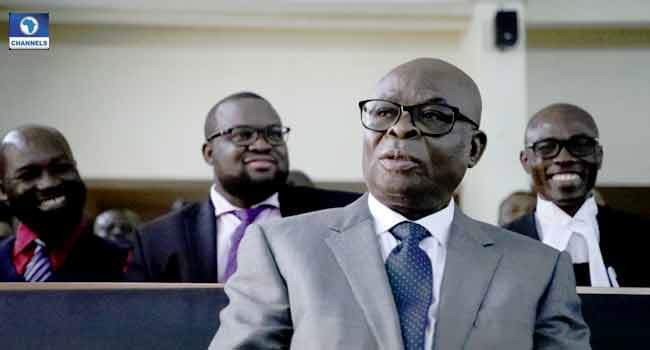 SAHARANEWS – Access to Justice (A2Justice), a non profit making organization has faulted the decision of the Code of Conduct Tribunal ( CCT ) that convicted the suspended Chief Justice of Nigeria ( CJN ) Walter Samuel Nkanu Onnoghen on a six count charge of false declaration of assets.

This is coming on the heels of the 16 grounds of appeal filed at the Court of Appeal, Abuja by Onnoghen immediately after the CCT judgment on Thursday.

Joseph Otteh, Director, A2J, in a chat with newsmen on Friday said that a cardinal rule of law requirement is that courts and tribunals which exercise judicial powers should be independent of other arms of government and appear, in the perception of reasonable observers, to be so independent.

“Unfortunately, the CCT did not offer this guarantee of independence, neither its perception. Far from it. The CCT had, from the word go, drawn the handwriting on the wall indicating that it was bent on a particular outcome, and that it would look neither to the left nor to the right in the blind pursuit of that goal”, he said.

He said that undoubtedly, Onnoghen’s trial before the CCT was, in every way, grossly and grievously unfair, and no fair-minded court or tribunal could have descended to the depths the CCT delved in trying to convict Walter Onnoghen on the charges against him in order to remove him from office.

The CCT, according to him, was so desperate to convict Onnoghen that it had to overturn or side-step its previous judgments on similar matters, decisions such as those given in a prior case involving another Justice of the Supreme Court. Adding that a cardinal principle of our Common Law system is that similar cases are decided alike in other to prevent arbitrariness and caprice in the adjudication of cases.

“This is not a way to fight corruption. There is no positive, but rather, there are plenty negatives to this flawed judgment. This judgment merely shows how much is still lacking in Nigeria’s courts and tribunals and how distanced they truly are from being independent vehicles of justice”

BREAKING: Stop Calling For Restructuring, It Will Never Work In Nigeria – Emir Sanusi