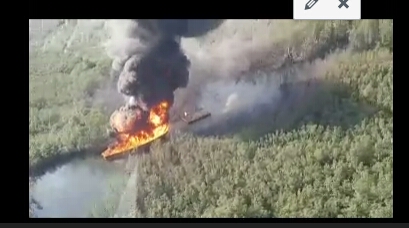 ABUJA – THE Nigerian Air Force,NAF,said Sunday that its troops involved in the fight against insurgency and terrorism in the North East destroyed Boko Haram terrorists’ gun trucks in Borno State.

Air Force spokesman,Air Commodore Ibikunle Daramola,in a statement late Sunday,said the attacks were executed Saturday,January 2019, whilst providing close air support for ground troops at Damasak who were in pursuit of the terrorists who had attempted to breach their location.

“The Nigerian Air Force (NAF) Mi-35M Helicopter Gunship engaged the group of terrorists’ gun trucks in successive waves of attacks as they retreated, destroying and immobilizing 3 of them while causing significant damage to others and neutralizing several terrorists,”the statement said.

JUST IN: FG asks Army to vacate Daily Trust office, where about of the arrested editor and journalists still unknown.