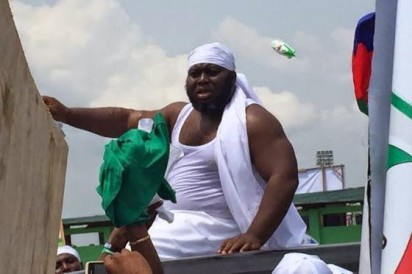 SAHARANEWS – Ex militant leader, Asari Dokubo, has warned the leader of the Indigenious People of Biafra, Mazi Nnamdi Kanu to desist from asking his members and Igbos not to vote in this year’s general election.

Dokubo in a video obtained by SaharaNews accused Nnamdi Kanu of “deceiving IPOB members and leading them to their death while he goes behind to collect money and other benefits from those that are working against the group.”

Asari Dokubo
He also said that boycottting the election will not do the group any good as they would have according to him, lost an opportunity to ”pay President Buhari back for the death of all their members killed since this administration came into office”.
Meanwhile, Nnamdi Kanu is yet to reply him over the accusations.

Kanu has been insisting that IPOB will Boycott the election and scheduled Biafra referendum to hold on 16th of February, the same date for the Presidential election.
See video