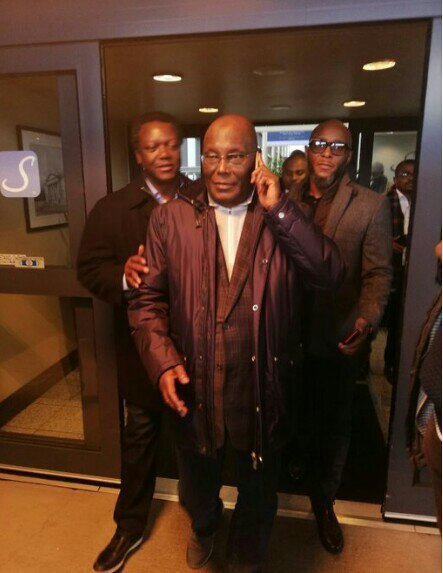 The former vice-president is reportedly scheduled to speak at the Chamber of Commerce today, from 2:30 pm to 4pm local time, although the event could not be confirmed the event.

The private roundtable, to be hosted by the US Chamber of Commerce and the US Africa Business Centre, is reportedly going to hold at 1615 H street, NW 20062.

Atiku secretly flew out from Lagos on Wednesday night with most of his aides and associates taken unawares.

He was scheduled to be in Ogun State yesterday morning but the event was cancelled.

TheCable had exclusively reported in December 2018 that Atiku had been issued with a US visa for the first time in 13 years.

His row with the US authorities began after the FBI investigated a bribery scandal involving William Jefferson, former US congressman, in 2004.

The All Progressives Congress (APC) has repeatedly said he was running away from investigations by the US authorities.

Adams Oshiomhole, the national chairman of the APC, had said Atiku could not travel everywhere, asking Nigerians to elect President Muhammadu Buhari whom he said could go everywhere.

“We have a president whose integrity cannot be faulted anywhere in the world, but the PDP has a presidential candidate who can only travel to Dubai,” Oshiomhole had said.

Atiku was accused of demanding a bribe of $500,000 to facilitate the award of contracts to two American telecommunication firms in Nigeria.

The FBI had searched his residence in the posh neighbourhood of Potomac, Maryland, but no money was found.

The investigators had videotaped Jefferson, who was the congressman representing Louisiana, receiving $100,000 worth of $100 bills which he claimed was meant for Atiku, but the former vice-president has consistently denied the allegation.

Former president Olusegun Obasanjo was said to have been very instrumental in the process which made the US grant Atiku the visa.

Atiku is expected to hold consultative forum with Nigerians in diaspora, as TheCable initially reported.

BREAKING: Once you join APC, you become righteous and your sins are forgiven – Oshiomhole